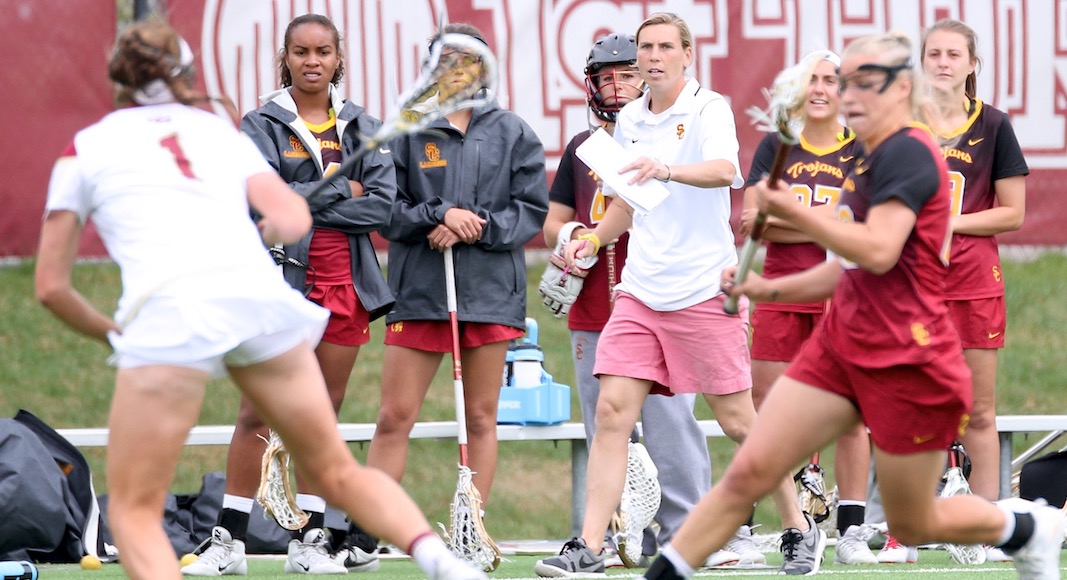 The large turnout was proof to the coaching staff that girls’ lacrosse continues to grow in Southern California and that the region is developing top-flight talent.

“We had a great turnout!” Wills said by email.  “And not just with numbers but with competitiveness and talent too! I was very impressed with several teams that I had never heard of and they were some of the strongest players on the field. I think the number representation alone through, shows how excited Southern California is about lacrosse and that the talent level is growing every year.”

Reilly was equally enthusiastic and took pleasure in seeing so many young players take advantage of the opportunity to meet their role models.

“AWESOME!,” was Reilly’s reaction to the turnout.  “This means close to 150 players were able to interact with arguably one of the best female lacrosse players of all time and indisputably the best goalie, Devon Wills, and to connect with University of Southern California Division I lacrosse players.”

The large turnout allowed for plenty of competition in the 18-team 5v5 tournament that was won by the Plaid Pumas.

Similar to box lacrosse, the small 5v5 field promotes the development of skills that translate well to field lacrosse.  Players are forced to execute and react in a small space with a limited amount of time.

“I like 5v5 events because the smaller numbers allow players to push their creativity while maintaining a fast-paced game,” Wills explained.  “Meaning, there is more space to try a new shot or a new dodge. Likewise, players can learn to play with their teammates and to work off of each other in a smaller setting first, then take that out onto the full field with their club/high school teams.”

Reilly liked not only the pace of the 5 v 5 games but also the queen of the hill tournament format.

“As a coach”, Reilly said, “I thrive in this environment because players have to respond quickly. There isn’t time for getting caught up in mistakes, but instead, only time to respond and recover. Also, structuring the tournament as queen of the hill gives teams opportunities to play different opponents and respond to different situations in a short amount of time.”

Saturday was not just about the tournament though.  The girls also had the opportunity to learn from and rub shoulders with some of the best women’s lacrosse players in the world.

“Girls attending the event walked away with a new set of warm-up stickhandling drills and an appreciation for the basics,” Reilly said. “Drills taught at the event were complex, but only because they combined all the basics. Executing ground balls, cutting, catching, throwing, defending, and shooting is similar in high school as it is in college…it just gets a lot faster! We cannot overlook the basics. I would add that a takeaway is building relationships with local celebrity lacrosse players; college players, like youth players, like to have dance parties, love lacrosse, and have a blast with their teammates!”

If you missed out on Saturday or want a second chance at becoming Queen of the Hill, save the date for the Winterfest 5 v 5 Tournament and Clinic on January 28th at a location to be determined.