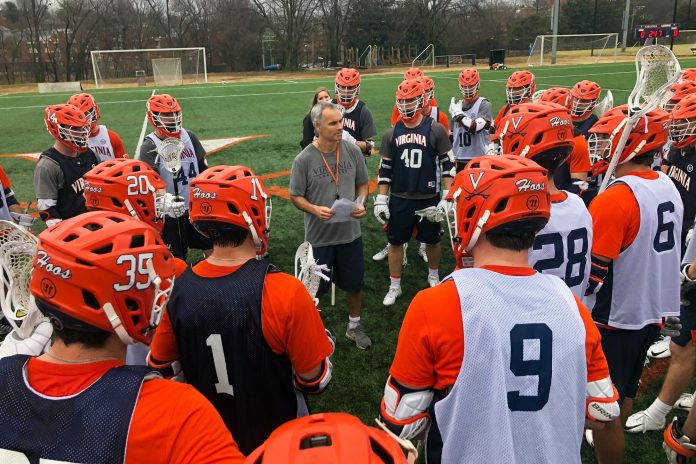 Lars Tiffany, head coach of the University of Virginia, the defending national champions,  was gracious enough to jump on the phone  with Devin Arkison of Lockdown D  to talk about his influences and the program’s culture and recruiting for Maxlax and SoCal lax fans.
DA:  Coach, as you know I’m a huge fan of the upstate NY lacrosse style and attitude.  You grew up in Syracuse, how did that influence your style of coaching?
LT:  I got lucky, I went to Lafayette HS, I grew up playing with the Onondaga people from the reservation who are Native American.  They are part of the Iroquois Nation. I learned the game from them They taught me how the game was to be played with grit and toughness.  In all sports I learned how to be a fierce competitor from their example. I also learned lacrosse is the medicine game from them as well, it is to be respected.
DA:  Trenna Hill gave a presentation I attended on the medicine game, it was fantastic ( Trenna Hill is also Lafayette HS alum lax’er) .  I stress off-field attitude and classroom performance to players and parents I coach, how important is that when you look at a recruit?
LT:  We want high IQ lacrosse players.  Decision making is of great importance.  Also before we take a player we ask can this kid be a captain? We really want leaders in our program.  Also we spent so much time gauging grit – to a fault at times.  We’ve missed some talented players but if a kid doesn’t have that grit he’s not for UVA.
DA: What percentage of players on your roster were two-sport high school athletes?
LT:  The vast majority, almost 100%.  We have a few exceptions. Those players had all the things I mentioned before.  It’s a battle to get on the field and play in college.  Two-sport high school athletes are the most competitive year round.  Fall lacrosse at this level is a battle so we want guys that are used to that in high school and compete all year in school sports.
DA:  You had great success at Brown and won a National Championship in your third year at UVA, how would you describe your team/program culture?
LT:  As coaches when we sat down at UVA to create off-field culture we looked at standards vs rules.  We want to live up to the standards we set.  Our three   main points are simple:
If we focus on others, are empathetic and humble off the field it all falls into place. Selfish players with an attitude are not for UVA.  Standards vs rules works for our program.
DA:  For sure younger players reading this might want to focus on the humble part at times.  I had a couple local fans ask about the shot clock.  Has it changed the way you recruit or style of play.  You already played extremely fast so perhaps no change?
LT:  It actually slowed us down in a good way.  The clock gave us a visible metric to gauge a possession short term.  If we get a good shot 5 seconds into a possession we still take it, but the 15 yard shot that isn’t the best 20 seconds in, we may pass up. Seeing the clock has cut our mistakes, it’s given us a little better sense just how fast we are going, and maybe pass on the 15-yarder for a 12-yard shot from better spot.  The shot clock has made us more patient actually.  No change on how we recruit.
DA:  Coach great to catch up, I know SoCal lax’ers appreciate your insiights.
Devo’s fun facts:  Trenna Hill is a member of the Onondaga and played for the Iroquois National team and coaches in the LA area at various levels including club, college and for Harlem Lacrosse. She is a graduate of Syracuse.
St. Margaret’s assistant coach Tom Groeninger was a star goalie at UVA.  He went to the Final Four twice. I believe he is still in the top 10 all time in number of saves for the Cavs.
Bobby Gavin (Torrey Pines ’20) will head off to start his freshman year at UVA soon as goalie in Coach Tiffany’s incoming class.
UVA won the NCAA title in 2019, it was the program’s sixth title.  In 2018, it was Yale as champs under head coach Andy Shay, another upstate New York product.  Shay is from Cortland NY.
In 2017, the Maryland Terps won it all, under yet another upstate guy, John Tillman. He is the product of legendary program Corning East High School.
Related articles by Devo:
Back to the future: run and gun lacrosse.    Talks about the college game going back to faster play and higher scoring and asked how long it would take coach Tiffany to win a title.
West Gennesse: More than just a lacrosse drill.  Discusses upstate New York style of play by looking at West Gennesse High School’s 91 game win streak in the 80’s.   After losing the 92nd game, they went on another streak to make a 135-1 record over several years.