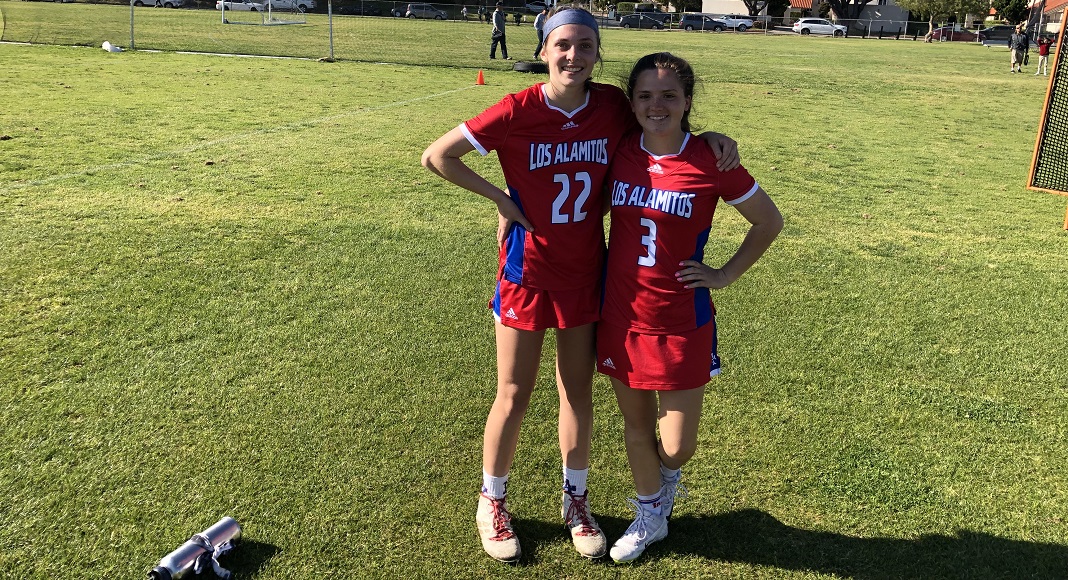 Riley Deutsch (pictured right) led the Griffins with six goals while Ana Canning (pictured left) had three goals. Skyler Kustich and Karina Hernandez each had one goal for the Griffins, who got six saves from Madison Shean.

Deutsch made her return for the Griffins after suffering a wrist injury in last Friday’s game against Newport Harbor. She also didn’t play in Los Alamitos’ 18-8 loss at Santa Margarita on Tuesday.

“I was a little worried about her wrist injury. She plays through illness, she plays though getting rocked on the field, she plays through a lot. I’m really proud of her and how she overcame an injury to bring us six goals today,” Griffins coach Courtney Novak said about Deutsch.

Against Corona Del Mar, Deutsch made her presence known. After the Sea Queens scored the first goal of the game, Deutsch scored the next three goals of the game to give the Griffins a 3-1 lead.

With the Griffins leading 4-3, Caroline Brewster scored two straight goals for the Sea Queens, giving them a 5-4 at the 5:46 mark of the first half, which turned out to be the halftime score.

The Sea Queens were unable to add anymore goals the rest of the way, as Shean and the Griffins’ defense was stout and the Griffins controlled the ball by winning draw controls and scrambling for loose balls.

“I said, ‘girls if you want this, you can take it, but you got to work.’ The defense upped their footwork, they calmed down when they were transitioning, we kind of minimized our turnovers and attack just had to be patient and watch their defenders to see what they did in order to figure out to score,” Novak said.

“We just couldn’t connect on our shots and we didn’t take care of the ball as much as we needed to [in the second half],” Sea Queens coach Jessica Murray said. “I think we transitioned very well out of defense today, and that felt really good.”

Up next for the Griffins (5-5, 2-1), its last Sunset League game of the season at home against Edison. For the Sea Queens (4-7, 2-2), their schedule gets tougher from here on out, as they play No.12 JSerra at home on Tuesday.