Derry and Eggeman Ready for Denver 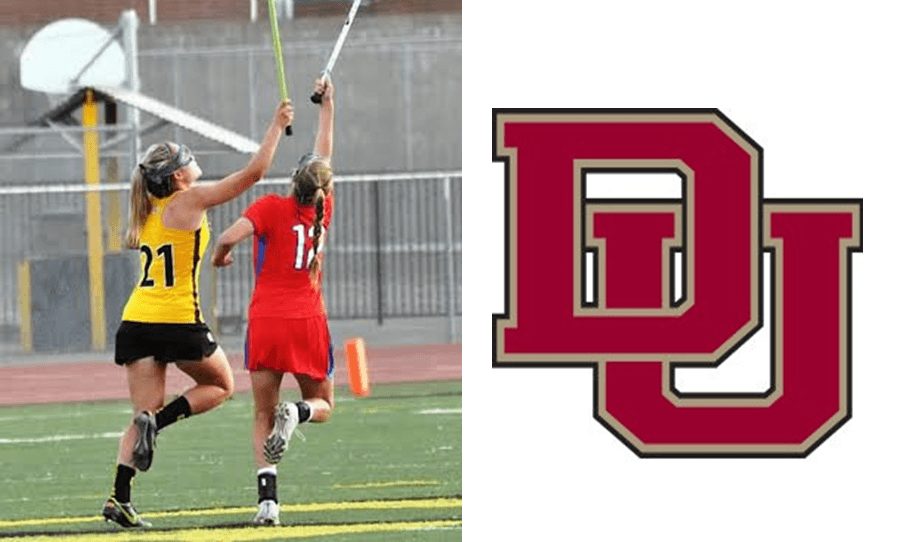 Eggeman, the reigning Player of the Year, and Derry, a First Team All County honoree, may have been the most talented athletes in the County tearing it up during the past 2013 spring season.  Eggeman’s 50-yard, straight-shooting dashes to goal helped bring her Cougars to semifinals.  Derry’s pop-flipping, one-hand ball grabs, and draw control helped the Griffins win the Southern Section Championship for the sixth year in a row.  They were both prized players on each of their high school teams. And now, they will spend their next four years together as Pioneers at University of Denver.

Derry and Eggeman may have been fierce competition against each other during their high school lacrosse careers, but the lacrosse endeavors they will take on side-by-side next year at DU are just a continuation of the strong friendship they have already forged.  In an exclusive interview with MaxLaxOC.com, OC’s DU girls tell us more about it.

MaxLaxOC: How did you two start playing lacrosse and at what point did you meet each other?

Riley: I started playing lacrosse in fourth grade. I went to St. Mary’s, a private school in Aliso Viejo, where it was being offered for the first time and I really wanted to try it out. I immediately loved it once I started and have been playing ever since. The first time I played against Derry was in middle school when I joined La Paz Storm and we were rivals. We did not actually “meet” until we played together in high school.

Derry: My mom initially asked if I wanted to sign up and my response was “No, lacrosse is stupid!” 2 years went by and in the summer going into 7th grade one of my friends asked me to come to practice so, I did. I instantly fell in love. The first time I “met” Riley was when she played for Storm in middle school. I played for Beach Cities and our teams were rivals. We never really met until a couple years later.

What were your first impressions of each other, as athletes and as people?

Riley: The first time I ever saw Derry was on the field and I did not think about her personality but just to stop her because we were rivals and I knew she could score. When I met her as a person, she was actually pretty quiet until I got to know her better and she is the most fun person to be around. She is so passionate and funny and is a ball of energy.

Derry: If we’re being totally honest I thought Riley was intimidating and scary. I also thought she was a little mean but that comes natural with being rivals. I later learned she’s just a little ball of kind sunshine (unless she gets an ear infection).

How much lacrosse did you play with each other from there?

Riley: We did not play together until high school. So over the last four years we have played on XTEAM and Team OC. Also, we played against each other during season.

Derry: Over the last couple of years Riley and I have played on Team OC or XTEAM together for nearly every season it was offered.

When was the first time you played against each other competitively? What was that like?

Riley: The first time I remember playing against each other in high school was my junior year but it is a lot of fun to play against her. We both are so passionate and competitive that it’s always a stressful game but it is also my favorite game every year.

Derry: All I remember is that we were both extremely competitive and it was definitely heated competition.

How do you compete against your close friend? How do you go from friend to rival?

Riley: When I play, I do not like to talk to the other team, no matter how close I am with them. I am very focused and competitive so it is so hard to keep that focus when I play against and mark Derry. All I want to do is laugh or mess with her.

Derry: Personally, I find it difficult because my strength in lacrosse comes from having fun with it and laughing and staying relaxed so, playing against a friend only makes me want to laugh more than I already do.

Do you have any specific, special memories playing together?

Riley: I have so many I want to say! I feel as though we connect really well when we play. So I have a lot of memories of her making a great cut and me feeding it to her and she would score such a great goal and then celebrating after. However, a memory that I love is when we were not even in a game, we were playing wall ball up in Los Al and LC made us sing songs while we played so we learned to multitasked. It was actually really hard but so funny because she would make up songs or have us sing really comical ones.

Derry: One special memory of mine was when we played on XTEAM together and we went to Sandstorm. We played Team 180 in the championship game. Not only did we have zero subs all weekend but we had already played 3 games that day and I believe 2 the day before. Anyways this game was specifically special to me because after such a hard and long weekend Riley had a killer game and scored the winning goal.

Do you have any specific memories playing against each other?

Riley: Last year when I played against Derry during season, she had just recieved a yellow card and came back into play. She did not want any more fouls so as I was sprinting towards her she put both hands behind her back and said, “I’m not touching you.” I was laughing so hard I couldn’t continue my drive and passed the ball to a teammate.

Derry: Two memories stick out to me. In 8th grade when she would beat everybody in a straight sprint and junior year when we played against each other and could not stop laughing. There’s photographic proof of that too.

Do you two hang out off field? How’s that?

Riley: I live about 45 minutes away from her so it’s hard to travel that a lot but we hang out whenever we can. I like to drive up and we play lacrosse or do fun things or whenever she is in south orange county near me she will visit.

Derry: Yeah, we do. Not too often because of the distance but we hang out at summer league and she just came to my house to go rock climbing and hang out with some other friends.

What other players friends, coaches, supporters, etc do you two have in common?

Riley: Derry and I traveled everywhere with Fez (Haley Fessenden). We’ve had countless adventures and plane rides together. We have a lot of lacrosse friends in common because we play on a lot of the same teams and both help coach Team OC as well. Since we are on the same club teams we have mutual coaches as well, like LC.

Derry: Fez (Haley Fessenden) is one of our mutual bffs however, she is at Navy right now. Almost all of my lacrosse friends are her lacrosse friends too since we try to be apart of spreading lacrosse in the community as much as we can. We go to Team OC practices and help coach.

Ever not get along?

Riley: I think like all friends we’ve had our disagreements but nothing we couldn’t workout in like 5 minutes.

Derry: There have been times where we get a little annoyed but nothing that has ever been a big fight (yet). We’re a lot like boys in the sense where if there’s a problem we get over it really quickly.

How do you anticipate taking your on and off field friendship to DU lacrosse?

Riley: I anticipate that since we will be roommates we will be helping each other a lot. I think we will become a lot closer and push each other to be our best.

Derry: I anticipate friendly and supportive competition in both schooling and lacrosse.

What expectations do you have of Denver University itself and DU lacrosse?

Riley: I expect to be pushed to my limits in school and lacrosse. I want to be challenged and I am excited about what is to come.

Derry: I expect to be put to the ultimate test. I expect a lot of moments of pure exhaustion and a lot of fun.

What key skills, philosophies, or lessons will you take from high school life/lacrosse to college life/lacrosse?

Riley: The life lessons and lacrosse skills I’ve acquired over the years has been mostly because of XTEAM. They taught me to be a better person along with being a better player. I learned to be mentally and physically tough and I learned more about the type of person I am. I would never be where I am today without the coaches and the club itself.

Derry: Personally, I have a special quote from the book “The Power Of One” that I will always carry with me. It goes “First with the head, and then with the heart and you’ll be ahead from the start. The mind is the athlete, the body is simply the means it uses to run faster or longer, jump higher, shoot straighter, kick better, swim father, hit further, or box better.” I’m a sucker for corny, inspirational quotes.

How much does going to DU together mean to you?

Riley: I am so thrilled to be going to school with Derry. The transition of going into college will be so much better having such a good friend as my roommate. I anticipate being less homesick as well because having her there is like bringing a little bit of home with me.

Derry: It makes me feel relieved because it’s like taking a little piece of home with me. I knew that I wanted to experience a different place with completely different people but I think having Riley will make it an easier transition.