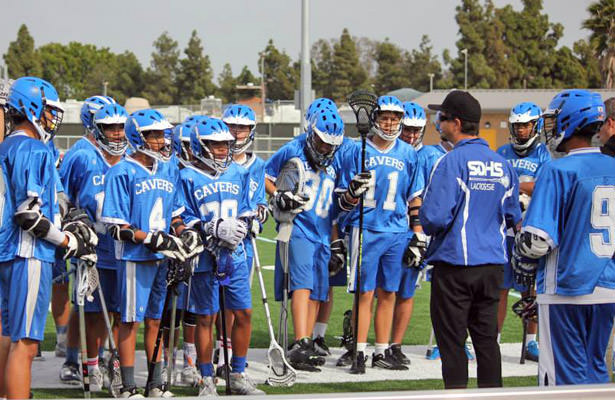 San Diego High School was established in 1882, making it one of the oldest public high schools in California. It is situated on the southern edge of Balboa Park and has some 3,000 students. But for all that history and all those students, until 2013 it didn’t have a lacrosse team.

By the time lacrosse came to SDHS, there were 47 other high schools playing the sport in the CIF San Diego Section. Lacrosse had grown up all around the city and had become a staple of the high school sports scene. But not at SDHS.

That’s where Deron Ambler comes in. The founder and head coach of the SDHS lacrosse program, Ambler also is something of a lacrosse pioneer in the area. His lacrosse journey started some 20 years ago at Patrick Henry HS, where he played for one of only 14 teams in the entire San Diego area. Now there are 54.

Playing for coach Russ Olsen, who won two championships at Patrick Henry and a third at Serra, Ambler was inspired to be among the next generation of West Coast lacrosse advocates. He decided even before graduation that he would become a lacrosse coach, and his senior yearbook quote read: “There is no CIF [Lacrosse] tournament but after the growing interest in the sport of Lacrosse, I’m sure we’ll eventually get one.”

That hope, of course, came true. But even Ambler had no idea how much he would contribute to the game’s growth.

Deron Ambler graduated from Patrick Henry and attended San Diego State, majoring in kinesiology and playing for the school’s club lacrosse team. Along the way he met and played with several individuals whom he would call upon later to help create the SDHS program.

After graduation, Ambler eventually arrived at San Diego High School, where he taught PE and helped coach various varsity teams. But the big one still eluded him.

Until lacrosse itself came knocking. A parent contacted Ambler and expressed interest in a lacrosse team. This prompted a survey of students, which yielded positive interest — the school community was excited by the idea of a lacrosse team.

But it’s never that easy.

Oh, and by the way, the school made it clear it would supply no financial assistance to either team.

This is a common theme at schools in regards to lacrosse, but the barrier to entry for the sport often comes in the form of cost — sticks, helmets, gloves, pads and uniforms, even goals and a bucket of balls. Lacrosse traditionally has been an upper-middle class sport because of those costs — never mind camps, offseason clubs and so on. It’s something many people want to change about the sport’s culture, getting sticks into the hands of kids who are willing but maybe not financially able to play. But it also was a huge hurdle for Ambler.

So he went to work, starting with his old San Diego State teammate, Chris Miller.

Ambler knew Miller was a lacrosse nut like he was; he knew Miller would bring plenty of lacrosse acumen, skill and intelligence. He also knew the Miller family were lacrosse saviors, as Miller’s father had saved the very SDSU program the two friends had played for. Ambler also brought on two other former teammates, Andy Osborn and Chris Swinko. Together, they set about figuring out how the teams could receive funding and get started.

After searching for old equipment online and at thrift stores, the future SDHS coaching staff happened upon the US Lacrosse First Stick Program. A somewhat unknown element of US Lacrosse, the First Stick Program aims to supply emerging areas with funding for equipment, coach training and various other things necessary to grow the game. US Lacrosse will sponsor new programs for two years and try and instill the values of the game in players in these emerging areas. Coach Ambler’s passion and drive was rewarded. SDHS received the grant, for both girls and boys.

Coach Ambler is adamant that his dream, and the SDHS program as a whole, would not be possible if not for First Stick. SDHS was provided with sticks and equipment, 24 sets the first year and 12 more the next. First Stick flew Ambler to Philadelphia for a coaching convention. The program was alive.

The Cavers debuted in the spring of 2013, with the boys posting a 7-13 record and the girls going 2-13, but both improved quickly. The boys went 11-8 last spring, their third season, and made the CIF Division II tournament, losing 8-6 in the first round. The girls, coached by Kelly Granfield, went 5-11 in year two and 10-8 last year.

But there is much more to starting a program at a school like SDHS than wins and losses.

Since the beginning, Ambler has emphasized building a program, laying the foundation for the future. The team continues to face financial challenges, having to fundraise for simple things like sweatshirts. But Ambler knows he is building something valuable — he knows, because he already has changed the lives of plenty of his players.

One player quietly asked Ambler and his staff if he could get into the locker room and shower before school. The player was homeless and sleeping with his father in their car. The coaches were shocked, but every morning they opened the locker room early. They also would pool as much money as they could to pay for hotel rooms.

“That’s what families do for one another,” Ambler said.

When the player’s teammates found out later in the season, they embraced him, hugging him and letting him know they accepted and loved him. The player stayed in school, kept playing lacrosse and eventually received a full academic scholarship to UC Davis.

Not all stories have a happy ending, though. Ambler has had to face even harsher realties and duties as he has become a leader of young men. A former player was killed in a car accident, and Ambler was asked to speak at the young man’s funeral. It was heartbreaking, but he knew it was part of his role.

But above all the serious issues, Ambler stresses a few simple things. Enjoy being a high school lacrosse player, and get well above the minimum 2.0 GPA. The Cavers have been successful on both fronts: The team consistently gets well above a collective 3.0 GPA, and they appreciate the team and the program. One player who switched from baseball claimed it was the best decision he ever made.

Moving forward, Ambler will continue to build the program and create a culture and team that relies on hard work and dedication. He also hopes to create a youth program that can feed into SDHS and perhaps inspire other city schools to add lacrosse.