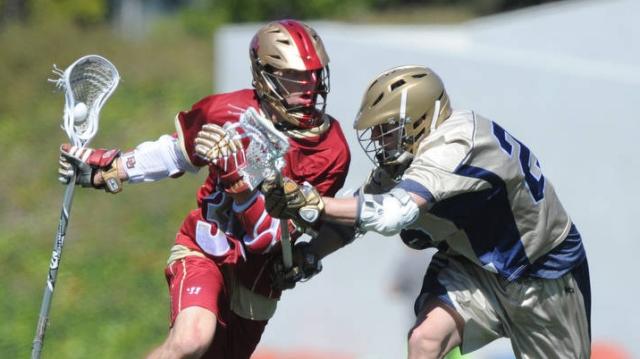 Led by a career-high six goals from junior Erik Adamson (Foothill alum) the No. 11 University of Denver men’s lacrosse team defeated the No. 6 University of Notre Dame 10-7 on Saturday afternoon in front of 5,870 fans at LeBard Stadium at Orange Coast College in the Pacific Coast Shootout.

The fans started piling in early to LeBard Stadium at Orange Coast College for the potentially the biggest event in Orange County lacrosse history. Previously, the only NCAA D1 games that had been played in SoCal were a part of the “First Four” tournament held one year at the Home Depot center in 2007 then at the University of San Diego in 08-09. The Denver vs. Notre Dame game came with hope that Orange County would respond to such a high level of lacrosse and the fans did not disappoint, feeding an electric atmosphere that was the lacrosse environment of dreams.

Former Foothill Knight Adamson showed up to play and had one of the best games of his career in front of the home crowd notching six goals on eight shots. Denver’s on-point shooting and voracious ground ball play led the Pioneers to a convincing win over the sixth ranked Irish of Notre Dame. Other Orange County alumni included Notre Dame’s Ryan Mix (Corona del Mar) and Denver’s Scotty McGowan (St. Margaret’s).

“I’m really proud of all of our young men,” said head coach Bill Tierney. “Beating a team like Notre Dame is a phenomenal achievement in-and-of-itself. Coming off the loss last weekend to Penn and a rough week of practice, I’m proud of how this team pulled together to gut out a win. I can’t say enough about Ryan and Jamie, and how they kind of kept us in the game, especially when Notre Dame had those runs in the second quarter. Erik had a great game in front of his home crowd to lead us with six goals.”

Denver (4-2) jumped out to a 2-0 lead by the 6:14 mark of the opening quarter with scores from Erik Adamson and Jack Bobzien. Attackman Westy Hopkins put the Irish on the board with 5:21 remaining in the opening quarter, but consecutive tallies from Adamson and a man-up deposit from Zach Miller gave the Pioneers a 5-1 advantage just over two minutes into the second period.

Notre Dame (2-2) responded with a 3-0 run of its own. Midfielder Trevor Brosco found the back of the net with 9:33 left in the first half and a man-up goal from fellow midfielder Sergio Perkovic 55 seconds later sliced the deficit to two (5-3). Fighting Irish attackman John Scioscia converted a man-up opportunity at the 2:26 mark of the quarter to make it just a one-goal affair. Scioscia, a senior, registered three goals and an assist on the day.

Two more goals by Miller and Adamson gave a the pioneers a crucial 3 goal lead early in the fourth quarter. Their lead was cut to two with a goal from Scioscia, but Denver regained the three-goal edge on a Wesley Berg score at the seven-minute mark.

John Scioscia scored three goals for the Fighting Irish, while four others added goals each. Goalie Shane Doss made eight saves on the day.

“Denver’s a very good team and they’re very good offensively,” Notre Dame head coach Kevin Corrigan said. “They are patient and they take the air out of the ball and that tends to put pressure on your offense because you don’t have a lot of possessions. When we had possession, we were getting what we wanted if we didn’t turn the ball over.”