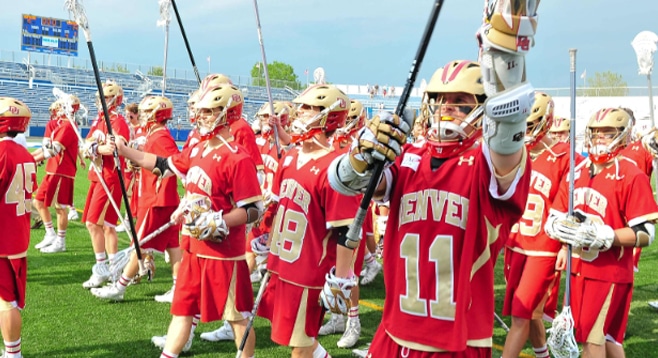 Lacrosse has been statistically proven to be the fastest growing sport in America. While the sport has been popular for decades in hotbeds like Baltimore and Long Island, this growth is most apparent in the “notbed” areas of the country, such as California, Colorado, and the southeast.  Colorado and the Denver area  is the penultimate example of the game’s explosive growth.

While college and professional teams struggle to draw large crowds in other parts of the country, the National Lacrosse League Colorado Mammoth, the Major Lacrosse League Denver Outlaws, and the University of Denver Pioneers all draw sellout crowds for big games.  Leading the way are the Pioneers, Since arriving at Denver University in 2009 Coach Bill Tierney has taken the program to never before seen heights, reaching the Final Four three times.  Coach Tierney had a legendary coaching career at Princeton, winning six national championships. The most by any coach in Division 1 lacrosse.

When Tierney arrived at Denver, he decided to build his program by recruiting from the Three C’s: California, Colorado, and Canada.  A fourth C, the OC, has become increasingly important to the Pioneers’ success.  Since arriving at Denver, Tierney has added  Eric Adamson (Foothill High School) and Scott McGowan (St. Margaret’s Episcopal School) to his roster.  Rising high school seniors Ryan Harnisch (St. Margaret’s), Brett Greenlee (Corona del Mar High School), and Nate Marano (Foothill) have all committed to play for Tierney beginning in the fall of 2015.

Both Adamson and McGowan were a part of this year’s Denver team that made it to the Final Four and look primed to do it again. Both were on championship high school teams, both were All Americans, but both were from the west and that moniker unfortunately signals a gamble for college coaches. As the game grows in areas like Orange County, that gamble is becoming less and less risky. Fortunately for Adamson and McGowan, Coach Tierney saw OC’s potential, and it has paid off for the program. Adamson was the second leading scorer on Denver with 44 goals, making him an integral part to DU’s success this season. Six of those goals were scored in a homecoming when Denver played Notre Dame in the Pacific Coast Shootout at Orange County Community College in March. A poetic event that symbolized the OC’s arrival as an A-list player on the national lacrosse stage. Adamson also received the NCAA’s prestigious “Elite 89” award given to the player who has exceled in their sport, while achieving high academic standing. As for McGowan, he has spent most of the year being groomed, as the defensive force of the future for DU. The success that Denver will have in the future will no doubt be attributed to his playing ability.

No doubt, Adamson’s success has paved the way for future Pioneers.  Tierney clearly has Orange County on his radar, and is bringing the cream of the crop to Denver.   Harnisch and Marano were named the OC Players of the Year the past two seasons, and have led their teams to Southern Section Championships. Greenlee burst onto the scene this year as a dominating, lockdown LSM who is almost surgical in the checks he throws. These three will no doubt continue to dominate in their final season in OC, and will go on to be contributing members of DU’s success.

While Denver has most likely established itself as a program to get recruited to, it did so by looking towards expansion. Coach Tierney knew the west, specifically Orange County, was a place that most likely will one day overtake the east coast as a hotbed for the sport. The players currently at Denver, and the ones who will attend in the future, exemplify this exponential growth.