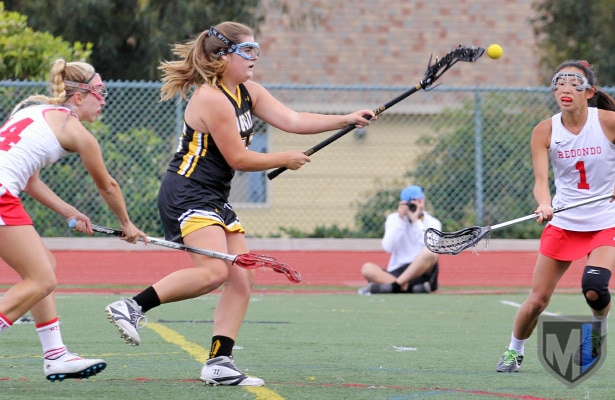 A turnover on the end line as the clock wound down gave Foothill an opportunity, and senior Carly Naud converted, scoring the game-winning goal with 24 seconds left to give the Knights an 11-10 win over Redondo Union in the U.S. Lacrosse Southern Section championship game Saturday at Mira Costa.

The title is the first for Foothill (15-3), which ended Los Alamitos’ five-year hold on the OC and Southern Section podiums with a semifinal win May 9. Redondo Union (18-2) was making its third trip to the section title game, the first since back-to-back trips in 2010 and 2011.

The Knights thrived all season on a stout defense, and that was a huge factor Saturday, as well. Only three teams had scored in double figures against Foothill entering Saturday’s game, and Redondo came in averaging more than 16 goals per game on offense. The Sea Hawks had been held to single digits only once and to 11 or fewer only three times.

In the early going Saturday, Foothill’s defense and ground-ball play kept Redondo in check. Though the Sea Hawks scored first and were tied 2-2 six minutes into the game, the Knights ripped off four goals in a row while holding Redondo scoreless for more than 11 minutes. Three of those goals came from junior Sophie Forrester, who finished with five — all in the first half as Foothill built an 8-5 lead.

The teams traded goals in the second half until Naud scored her second of the game — she would finish with three — with 13:34 left to make the score 10-7.

But then Redondo rallied, winning draws and possession, holding Foothill scoreless for 13 minutes and getting goals from Kayla Maanum, Maddie Farmer and Allison Tsuji to tie the score 10-10 with 7:31 to play.

Once again, though, the Foothill defense clamped down, and the Sea Hawks wouldn’t score again, despite continuing to win draws and hold possession for long stretches. In fact, the game-winning goal came after Redondo ran nearly three minutes off the clock looking for an opportunity to take the lead but willing to settle for overtime.

But Tsuji drifted too close to the end line behind the Foothill cage and was ridden out by sophomore Allison Parkhill for a turnover. The Knights cleared, and Naud finished things off.

Farmer led Redondo with three goals, and Allison Shamir and Hailey Vorndram each scored two. Tsuji, Maanum and Allison Kobel each scored one for the Sea Hawks, and Kobel recorded four assists.