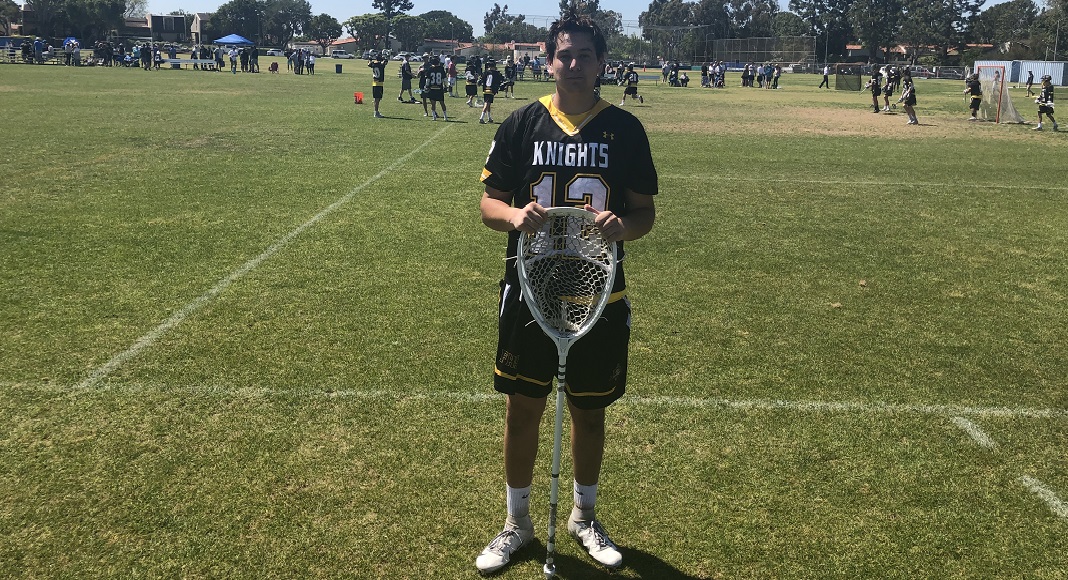 The No. 5 Foothill boys lacrosse team used its stingy defense to beat Corona Del Mar 7-1 on Saturday at Corona Del Mar High Schoo in a battle between two teams who pride themselves on defense.  Joey Garcia (pictured above) was a stalwart for the Knights, making 11 saves.

Foothill has played four teams in the Orange County Top 10 in the last three weeks and held each of them to single digits.  Garcia’s play has been instrumental in all those games.

“He’s playing strong. He has a lot of confidence, big body in the cage, quarterbacking us out there. He’s doing a great job giving the defense confidence,” Knights coach Jon Fox said.

A hot start also aided the Knights, as they scored the first three goals of the game and led 3-0 after the first quarter. Destry Burton added an empty net goal for the Knights, who led 4-0 at halftime.

Despite being man down more times than not, the Knights kept the Sea Kings off the board, whether it was Garcia making saves or the Knights’ defenders knocking the ball out of the Sea Kings’ sticks.

The Sea Kings got their only goal of the game when Tanner Beasy scored at the 4:44 mark of the third quarter on an extra man opportunity.  Beasy’s goal made the score 6-1 and although there was still plenty of time left in the game, the Sea Kings could not find any offensive rhythm.The Knights were able to add one more goal in the fourth quarter, and they rushed onto the field jubilantly when time expired.

“We just didn’t the pressure very well and we knew it was coming. We got a lot of young inexperienced guys and you can try to prepare for it all you want, but until you actually experience it, it’s pretty difficult to replicate. It was a learning experience for us,” Sea Kings coach G.W. Mix said.

Burton and Chase Cole led the Knights with two goals apiece while Riley Ahern, Troy Hofer, (two assists) and Roman Pistone each had one goal.

After losses to Santiago, San Clemente, Loyola and Arapahoe of Centennial, Colorado, Fox hopes his team is back on track, as they play at La Costa Canyon on Thursday at 7 p.m.

“You just learn from every game. Win or lose, you learn and we’re working on getting better, trying to play our best lacrosse toward May. We’re starting to come together,” Fox said.

The Sea Kings can clinch the outright league title with by winning both games. But Mix is only looking at the next matchup at hand, which is against the Chargers.

“We got to recover quickly and be prepared. We got to be ready to go in 48 hours without a practice, which is not an easy thing to do. But we’ll find out how resilient we are on Monday afternoon,” Mix said.

Brandon Ross contributed to this article.