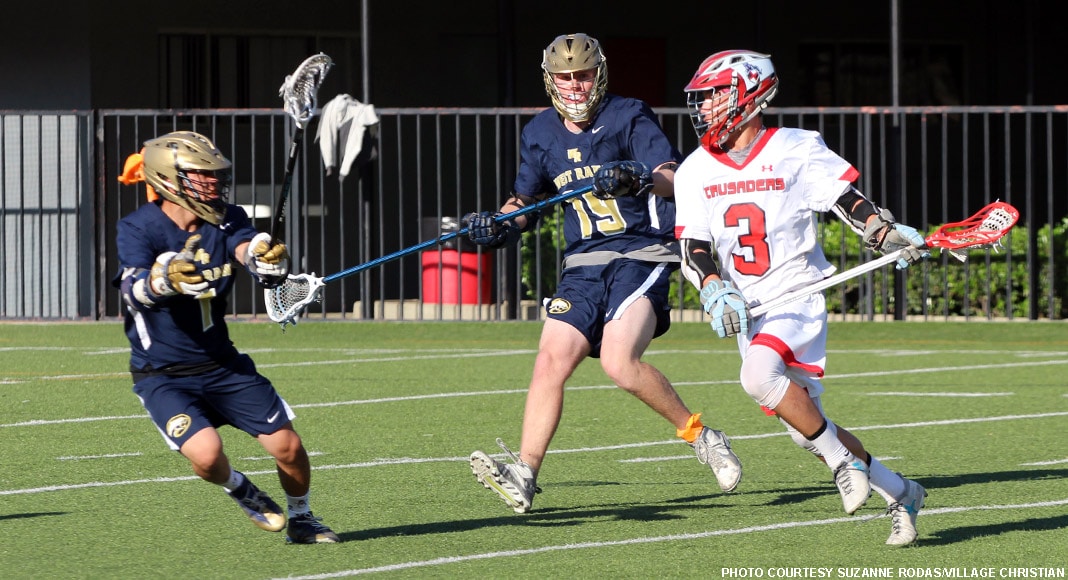 Fifteenth-ranked Village Christian has earned a reputation for its offensive firepower. Tuesday, the Crusaders leaned on their defense, which held No. 20 West Ranch scoreless in the fourth quarter in a 10-7 victory, VC’s ninth in a row.

The Crusaders (11-2) led 3-1 after one quarter and 6-4 at halftime, but the Wildcats (5-7) pulled even at 7-7 heading to the final period. The Village defense clamped down, though, blanking West Ranch in the final 12 minutes to pull out the victory. Junior goalie Jacob Zinder made 15 saves for the Crusaders.

Village’s usually high-scoring offense was limited somewhat by the West Ranch defense, including LSM Derek Moskal, short-stick defender Robbie Myers and goalie JB Benedict. The Crusaders came in averaging nearly 17 goals per game but were held to six in the first half and only one more in the third quarter.

Kyler Konjoyan (3 goals, 1 assist), Harrison Woo (2g, 2a) and Griffin Rodas (1g, 4a) led the scoring for Village, and they were fueled by sophomore face-off middie Matthew Walz, who won 19 of 21 at the X. Donovan Rodas (2g) and Tanner Canfield (1g, 1a) also scored for the Crusaders.

Village Christian is right back on the field today, playing host to No. 18 Valencia in an effort to add another Top 20 win to its resume. The Crusaders currently are 2-2 against ranked teams, having lost to Crespi and St. John Bosco but beaten Sierra Canyon and West Ranch.

The Wildcats play at Glendale on Thursday then at home Saturday against nearby rival Valencia.