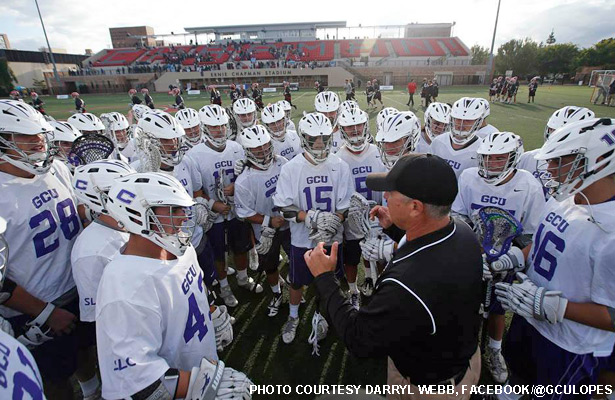 The defending national champion Grand Canyon University Lopes enter the 2016 season right where they finished in 2015 — ranked No. 1 in the preseason in both the Nike/Lacrosse Magazine Preseason Top 20 and the Under Armor MCLA Coaches Poll. The Lopes lost dynamic scorer Carson Barton to graduation — and the NLL draft — but return attackmen Dean Fairall and Drew Dziadyk, the team’s second- and third-leading scorers last season.

We are anticipating that 2016 will be a highly competitive season in the SLC. We have returned several starters from last season but will also have to replace a number of key players and All-Americans from 2015. We are not holding on to our success from last season, nor looking ahead too far in the future. We continue to work on the things that we believe will make us successful on a daily basis.

… we continue to work hard on a daily basis, concentrate on the process every week and stay focused on the details that make us successful.
— Jeff Guy, GCU assistant coach

The Lopes feature a number of players on their roster who have local ties: