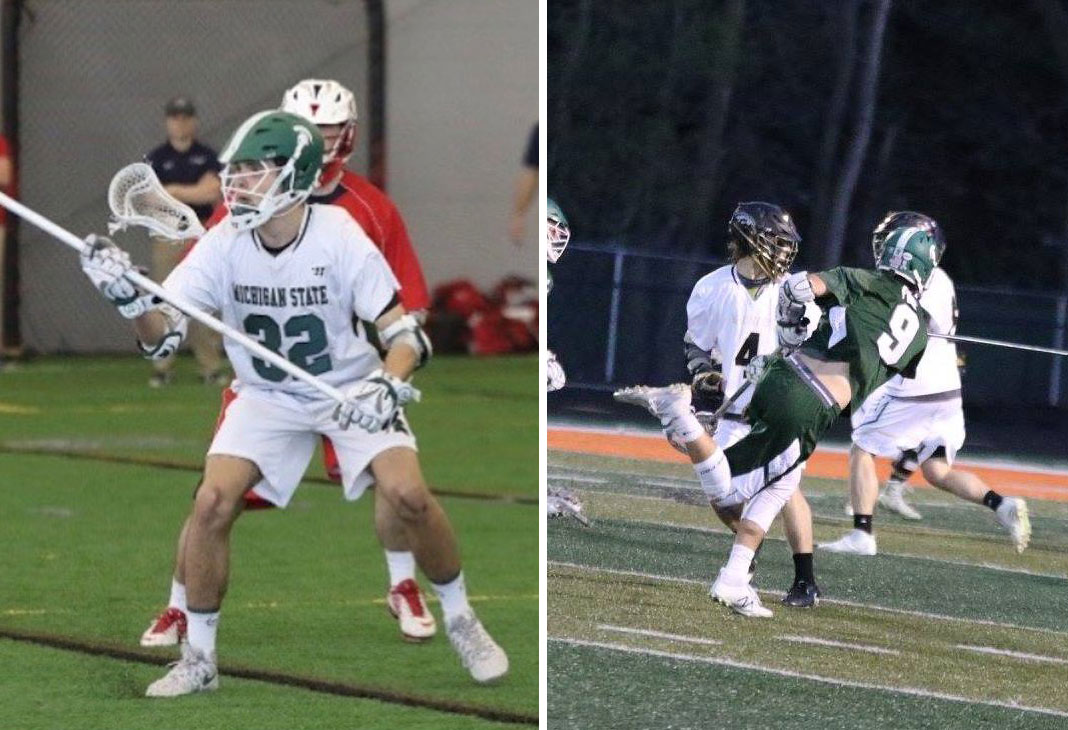 After reaching the first round of the MCLA National Tournament last season, the Spartans began 2018 ranked No. 13.  However, they surprised some people with their 5-0 start and as of last week have moved up six rungs in the national rankings to No. 7.  Deal and Neumann, the only two Southern Californians on the roster, are not only enjoying the ride but are also playing big parts in the team’s success.

Deal’s freshman season was cut short by an injury but he has recovered nicely and is now the starting LSM for a team that is allowing less than seven goals per game.  Deal has been a big contributor with eight groundballs, a goal, and two assists through three games.

After a strong freshman year in which he was the second leading scorer amongst middies with 15 points (10g, 5a), Neumann’s second season has been delayed by an injury.  He reports that he is recovering and should be back soon to help the Spartans make a run for another National Tournament bid.  The injury has not dampened Neumann’s enthusiasm or confidence in his team.

“We at Michigan State have a strong squad this year and have the potential to go all the way,” Neumann said by email. “Our strong base on defense has helped us build our way up through our offense through our attack. We have had a few slow starts on the offensive end but once we get rolling, we have proved ourselves as a force to be reckoned with.”

Lansing, Michigan is a long way from the OC and differences in culture and playing style are to be expected.  However, both Neumann and Deal feel right at home with their teammates.  Deal reports that the Spartans are a tight group of guys and are always together hanging out off the field.

Neumann noted that mixture of playing styles is important to the team’s success while giving a tip of the hat to his former fellow Sea Kings.

“Although we do have a heavy midwest crew, our variety of different style players from different regions adds to our success,” Neumann said. “That being said, I can’t argue the heart and intensity of Orange County lacrosse and how much I miss battling for a CIF title with my boys at Corona del Mar, under a great coaching staff led by G.W. Mix.”

Deal concurred that his OC high school experience had him well prepared to play at this level.

“The defense we play is very team oriented,” said Deal. “Communication is the biggest aspect to our success and we try to play as a unit at all times. When I came to State I felt I was very prepared from what I learned in high school and I could contribute to the team right away.”

The season is still young and a lot can happen between now and May, but the Spartans are rolling and will only get stronger with the return of Neumann.  A trip to Salt Lake City where they will have the chance to catch up with some old friends and opponents is certainly not out of the question .  Whatever happens, the two Southern Californians seem very happy with their college decision and encourage other young players to consider the same path.

“I am extremely hopeful to face some of my former teammates and rivals from high school at the next level in the MCLA,” said Neumann. “MCLA is a high paced next level for anyone wanting to continue their lacrosse path into college, and Michigan State offers a great group of guys that will surely battle for championship. If you think continuing is something you would want to do, reach out and represent the West Coast lacrosse we all know and love.”

For the second straight week @msu_lacrosse moved up three spots in the D-I poll, settling in at No. 7. Meanwhile, @gculacrosse and @utahlacrosse lead the way. Full poll 👉 MCLA.us. #mcla18 #spartans #lopes #utes