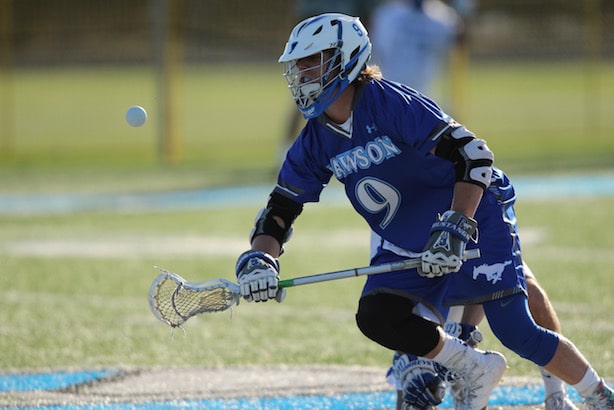 The “Game of the Week” between #1 Dawson Mustangs and #3 Cheyenne Mountain Indians lived up to its billing.  The Indians came out strong early to lead 4-1 at the end of the first quarter.  August Johnson put on a shooting clinic to provide the Indians with their offense.  They continued their dominating performance in the beginning of the second quarter and increased their lead to 5-1, behind an incredible performance in goal from Luke Paige, who seemed to save everything Dawson threw at him.  Dawson managed to cut the lead to 5-3 before the half.  The Mustangs began their comeback in the third quarter with a dominating performance at the face-off x by Kyle Sudol and a spectacular goal by Jesse Rosenblatt with  .2 seconds left to tie the score at 7-7.  The fourth quarter was all Dawson as they scored 6 goals to win going away 13-8.  Dawson scoring leaders were Hunter Watts with 4 goals, Jesse Rosenblatt with 3 goals and 2 assists, and Gavin Pure with 2 goals and 6 assists.  Cheyenne Mountain’s August Johnson lead the Indians with 5 goals.

#1 Dawson has another top ten match-up this week when they face #2 Windsor Friday 7pm at Windsor.