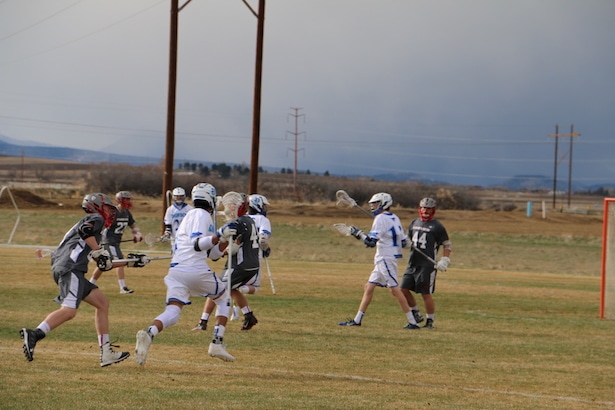 Dawson took the lead early behind Jesse Rosenblatt’s hat trick and a couple of key saves by senior goalie Chad Dunnell and never looked back.  The Mustangs capitalized on a couple of early penalties by Fairview and managed to hold on for a 13-6 non-conference win.  Both teams were without a couple of key players however Fairview’s freshman goalie, Robbie Annear, saw his first action of the season after returning from injury.  It was a difficult initiation for the freshman with most of the goals being scored uncontested right on the crease.  Dawson lead 7-1 at the half then Fairview scored a couple of late goals to keep it respectable.  Dawson’s scoring attack was lead by Gavyn Pure with 4 goals and 3 assists, Rosenblatt’s 4 goals and 2 assists, and the Watt brothers, Wyatt and Hunter each had a pair of goals.  Dawson travels to Cheyenne Mountain Saturday for a big showdown between the 4A top ranked Mustangs and #3 ranked Indians.