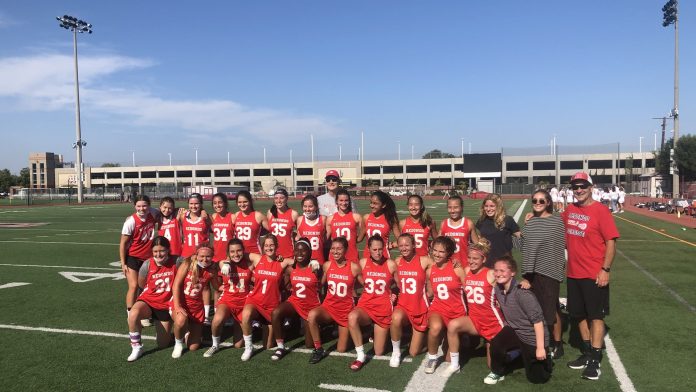 In defeating the Monarchs for the first time in its team’s history and avenging their only loss of the season, the Sea Hawks (17-1) advanced to the semifinals where they will play top-seeded Foothill at home on Saturday with a time to be determined. The Knights (17-0) defeated Newport Harbor in the other quarterfinal 17-2.

“We were working on breaking that zone defense all week. I told our girls, ‘Mater Dei knows our stars, so we need our number four, five six, seven, eight girl to step up,’ and they really did today. A lot of people were involved in this win,” Sea Hawks coach Tom Borgia said.

After the Sea Hawks scored the first goal, Mater Dei kept their offense at bay, as they were held scoreless for the next 12:28. While the Monarchs’ defense prevented them from scoring, the Monarchs’ offense scored five straight goals in that span and led 5-1 at the 14:24 mark.

After that goal, Mater Dei, found itself in a drought as Redondo Union’s defense found ways to force turnovers and Wlaschin made crucial saves. Davis scored the last two goals of the first half, as the Monarchs went into the intermission up 5-3.

The Sea Hawks scored the first goal of the second half at the 23:11 mark courtesy of Gonzalez, making the score 5-4, but five minutes and 26 seconds later, Mater Dei answered with a goal as Reese DeAneglo scored to make the score 6-4. That goal marked the first goal for the Monarchs in over 21 minutes, dating back to the first half.

Redondo Union kept Mater Dei off the scoreboard for the rest of the way, as their defense continued to force turnovers, scoop up groundballs and come up with big saves from Wlaschin. Goals from Thompson at the 16:49 mark and and Pluchard-Cole at the 14:51 mark evened the score at 6-6.

The Sea Hawks took their first lead since the first three minutes of the first half as Gonzalez scored off of a free position shot, giving them a 7-6 lead and forcing the Monarchs to call time out. 90 seconds after the time out, Davis netted her third goal of the game to put her team up 8-6.

The rest of the way, both team’s defense made it difficult to maintain possession of the ball, as both teams either made arrant passes or were unable to get a quality offensive possession. Alison Jensen made a save off of a fast break shot on goal, but eventually, the ball was turned over to Redondo Union, as Borgia called time out.

At the 4:04 mark, one of the Sea Hawks’ players was yellow carded and with a free position it seemed as if the Monarchs were going to regain momentum. But Wlaschin saved the free position shot and eventually, the Sea Hawks killed the penalty.

“We just didn’t take care of the ball. We had some silly turnovers and silly errors and we weren’t able to capitalize when we did have possession,” Monarchs coach Chloe Silance said.

Mater Dei eventually got the ball back with 42.3 seconds left and called time out to try and make one last attempt to tie the game and send it to overtime. But it turned the ball over, as Redondo Union stormed the field knowing it pulled off, according to Borgia, the biggest win in program history.

“We analyzed the game film that we had against them and we really worked on skip passes, not allowing the backer to send the high pressure up top, so we worked the ball around quickly, looked for the skip passes and we looked for the second and third cutters,” Davis said. “I’m just really proud of every single girl. They put in tremendous amount of effort.”

Sora Choi led the Monarchs (16-4), the co-champion of the Trinity League, with two goals while DeAngelo, Lauren Friedman, Chloe Seybold, Juliette Hill each found the back of the net once. Kaitlyn Nguyen and Jensen both split time in the cage and record two saves each.

“We had some great memories, we built a great defense, we built a mostly effective offense. The chemistry on this team was something that took 10 months to build and ultimately, it didn’t go the way we wanted it, but it was great to see them all play together,” Silance said

The Sea Hawks, the Bay League champion, now turn their attention to Saturday’s semifinal game against Foothill. While his team is coming off of a big win, Borgia wants his team fully focused on the Knights.

“We’re going to play our best game. After today we got to take a breath and we got to forget about the Mater Dei win and start focusing on Foothill and see what we can do,” Borgia said.