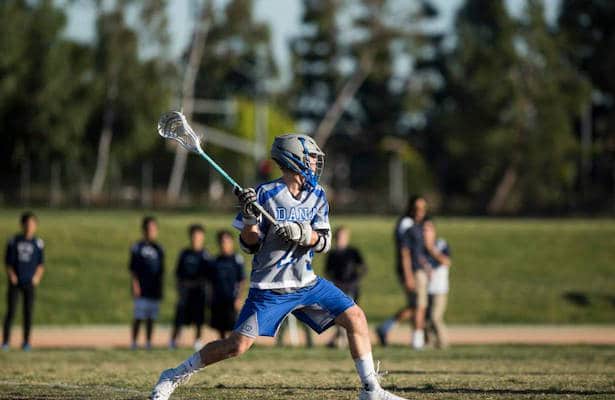 Dana Hills has flown under the radar while winning  8 out of their last 10 games.  They have three games left this season, all against Top 20 teams;  Aliso Niguel on Tuesday, Mater Dei on Wednesday, and El Toro on Thursday.  If the Dolphins have a successful week should they make the playoffs?  Head Coach Chris Iltis provided the following letter to give the seeding committee something to ponder.

Dana Hills has flown under the radar this year.  After coming out of the gates and taking some big licks no one was watching, the only things in the stands were crickets. But after that we were able to put together a string of wins while no one was looking. Is there a place for us to become the dark horse? To have your answer. You have to take a step back and rewind from last year. All the while when football went 0-30 for all 3 teams, that started a downward spiral at Dana athletics. However, lacrosse has been a beacon of hope for the pride of the school.

For the first time in the teams history most of the team worked year round to make sure everyone who stepped on the field could catch and throw. They also had a new program in the area which the players gravitated to instead of all splitting up. We set up OC Wave for players from the region to get some solid coaching, and really prep them to step on the field for high school ball. Gone are the days of the player who can run through everyone and go to cage, nope you have to use your whole team!

No matter which school they go to, we wanted to prep all our guys knowing some were going to other schools, however we know we can really benefit by playing as a community. We went into some tournaments outgunned as we had a big mix of JV and V players. We only competed in the Elite level at the tournaments. This was a look at the glass half full moment. We played against some great teams so we become better. However it would have been nice to get these guys some confidence before the home opener, which the players admitted they didn’t come to play, and with some brand new players on the field playing lacrosse at Varsity level for the first time really showed. However, it’s been a slow build. We’ve taken some beatings that’s for sure. That is usually when we come down and the players have the mentality that this team is better than us. If that is our attitude we have already lost.

However there is a story in here about a bunch of guys being left in the dust rising from that dust to become a team. It’s happened right in front of our eyes, an exciting moment for the coaches who have worked so hard to be there for them. We went on to win some tough games, and learned how to pick ourselves back up again to keep playing for each other. For many of the players it is their last year. “Great guys, not just great players, great people who will go on to become constructive members of society. We have really made fundamentals the key focus point. We have done our best to accommodate the athletes who come down here and work hard, we have lots of cross over athletes, which is good and bad (commitment issues) We have the hockey all stars who are now learning to become lacrosse players, we have basketball players, football players and a soccer players here. We even have a great player who quit track to dedicate to lacrosse, Kobi Greenberg. Then there is the story of a senior David Johnson who came down never knowing the game but his basketball IQ made him an ideal D middie and he has risen to become a great piece of our D. It just shows you an athletic student who dedicates to the game can become something great, and I think this is what the great coaches like Virginia’s HC Dom Starsia, and Duke’s John Danowski are talking about. Give me a 3 star athletic player who is coachable anyday over a 5 star player who isn’t coachable. Anyone who thinks they are above the team knows where the stairs are. And you know some players have walked up the stairs to never come back….boy they don’t know what they are missing. But I’m ok with getting rid of the poison in the well, so we all can succeed.

So let’s get back to brass tacks, is Dana on the outside looking in. Are the Dolphins a longshot for a bid, yes. However they went on a 6 game winning streak, and if they can prove themselves by beating El Toro on senior Day 4/30 at Home, do they deserve a 2nd look. I think so. I think when everyone shows up to play we can compete with the better teams and surprise ourselves. JV has been very successful beating teams like JSerra, so we get to see the future of the program and it looks good. If we keep OC Wave rolling we will see our first wave (no pun intended) of players coming into Dana who have played together and are lacrosse players, and great student/athletes.

Do we have players worthy of college play? Absolutely. When recruiters approach me about a player the first thing they ask, is what is their GPA?  We have many players who should go on to play MCLA, and NCAA in college because they can. Logan Perry (pictured above) senior 2 way middie, has been a great captain and example to the team of what it takes to play at the higher level, however he never puts anyone down. He has the I’ll do what it takes kind of player and he is going on to play in college and have a great lacrosse career. I’m extremely proud of our seniors. Guys like Jake Harris -G, and Tad Thayer Middie, F/O who have made every practice and have never taken their eye off the prize which has been just playing good lacrosse! Now at 9-7, losing to some very tough top 15 teams, are we ready? With Aliso on Tuesday and El Toro on Thursday if we can come away with 2 wins do we deserve a look. I am biased of course but I will plead their case, I think they do. So if we become the dark horse/ or the dark dolphin in this case, we will come to play and play hard. We may just surprise ourselves and also the lacrosse community. Either way, it’s all about the journey.