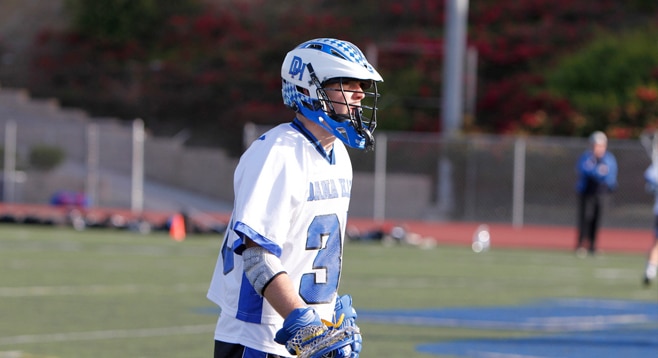 Both teams struggled offensively for the first three quarters in a game that ended with a wild fourth quarter and Dana taking the lead for good with 2:21 remaining. Trevor Kist lead Capo with a strong outing at the face-off X, winning 13 of 15. Freshman goalie Jordan Wanger once again kept Capo in the game with 8 saves, including some right on the doorstep.

Dana started off quickly with a goal by Brett Bill (2g) less than one minute into the game. Capo came right back and tied it with under five minutes left in the first quarter on goal from Sam Slobom (2g). Logan Perry (2g) got one back for the Dolphins and Dana took a 2-1 lead into halftime.

Capo tied it early in the third on a nice dodge and rip from Slobom. Keeping with the seesaw theme, Perry put Dana up 3-2 at the end of third. Capo took a 4-3 lead early in the fourth with Blake Berk dodging from X and Drew Casas finishing from the crease on a feed from Cameron Lopez. Dana tied it with just under seven minutes remaining on Bill’s second goal and took the lead 5-4 about a minute and a half later on a goal by Colton Brown assisted by Mike Brant. Capo tied it up at 5-5 with 3:35 left on shot from the left wing by Brad McCarville on a pass from Blake Berk, but Brandon Rogers scored the game winner for Dana.