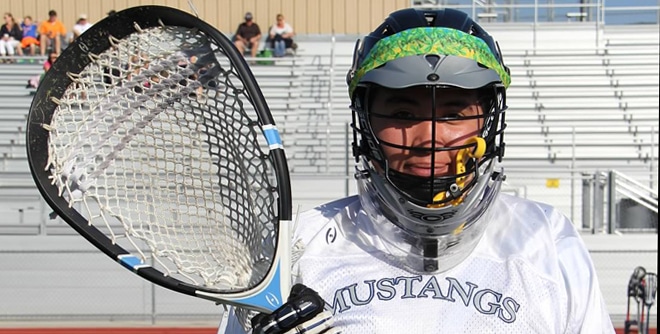 Trabuco Hills senior Cyrena Malkowski is MaxLaxOC.com’s Girls’ Player of the Week. The Mustangs had a busy week playing five games including three on Saturday in the LA/OC Shootout. One of the biggest reasons the Mustangs came away with with a 4-1 record last week was Malkowski’s dominant play at goalie. She had an impressive 49 times stops over the course of the week including 15 against St John’s School of Houston, the defending Texas state champions. Malkowski showed she is one of those rare players who rise to the competition and excel when the pressure is mounting. One of the hardest spots that a goalie is put in is defending against free position shots. Malkowski had 24 of her 49 saves this week against free position shots.

Malkowski’s best outing may have come against Mira Costa when she allowed only one goal all game and rejected 8 of her 9 shots from the free position. Coach Scott Leong had this to say about his star goalie: “Cyrena”s goalie skills have helped our team jump out to a 6-1 start. Besides the fact that she has great “saving” abilities, she is able to come out of the crease to intercept feeds before they they become a shot. She directs the defense from her vantage point, showing great patience for properly clearing the ball. This is a great asset as it helps us transition from our defense to start our attack. She has helped get us to where we are this week and will be a major part of where the Mustangs go this season.”

The Mustangs are off to one of their best starts since 2010. Malkowski brings veteran leadership to a tough aggressive defense. Her presence in goal has made the difference in what is shaping up to be a great Mustang lacrosse season.