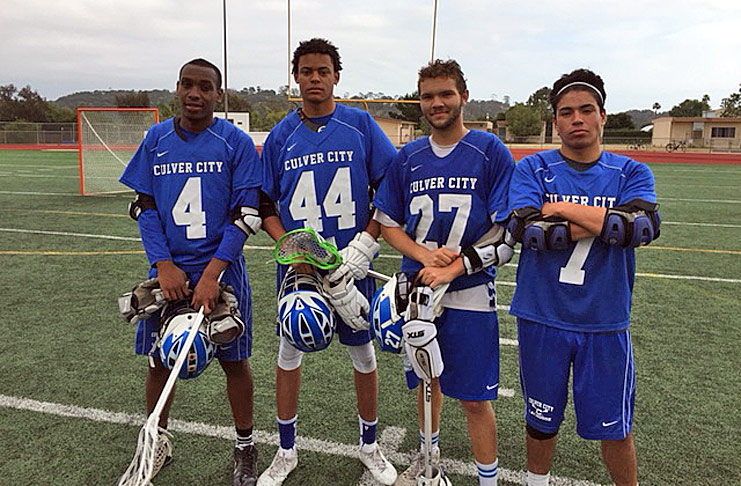 Culver City High School Lacrosse announced that four seniors from the Centaurs’ 2017 squad will be moving on to play collegiate lacrosse next year, coach Casey Chabola said via email.

The seniors led Culver City to a an 8-10 overall record this season — 4-4 in the Ocean League — and a berth in the US Lacrosse Postseason Invitational tournament. After a first-round win over Redondo Union, the Centaurs were eliminated in a semifinal loss at San Marcos.

Here is a look at the four Culver City seniors (listed in order of the photo above, left to right):

John Lewis IV, D/LSM
A two-sport athlete playing football and lacrosse, Lewis played both the close defensive position and as a lock-down LSM. He was named All-Ocean League as a junior. He led the team in deflected passes and usually covered the opposing team’s best midfielder.

Christian Trice, A/M
A three-year varsity player who plays both attack and midfield, Trice was named All-Ocean League each of the last two years..

Tyler Higgins, M
A two-sport athlete who plays water polo and lacrosse, Higgins has committed to play at UC Santa Cruz. He is a three-year varsity lacrosse player for the Centaurs who was named an All-Ocean League midfielder the past two years. At UC Santa Cruz, Higgins will join 2016 Culver City graduate Anthony Overton.

Elijah Zavala, D/LSM
A two-sport athlete playing football and lacrosse, Zavala has been offered by Notre Dame De Namur. He was named All-Ocean League defender the past two years.