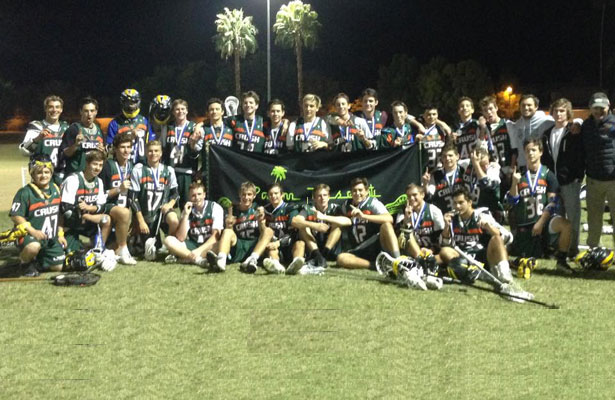 In what has come to be a Thanksgiving tradition, lacrosse teams from Los Angeles, Orange County, and San Diego flocked to the Palm Desert Classic for some of the best lacrosse southern California has to offer.  For the second year in a row the Coach Jon Fox’s(Foothill) OC Crush club team from Orange County clinched the featured U-19 Elite Championship against some very talented teams.

No statistics were recorded, but had they been it would have shown it took a complete team effort by Crush to defeat some pretty stiff competition. From Sam Cron (Foothill)) dominating at the face-off X, to an attack line anchored by Nate Marano (Foothill,Denver), Kevin Kodzis (Foothill,Holy Cross) and Jonah Rinaldi (Aliso Niguel), to an outstanding performance by goalie Ryan Blank (Foothill, St. Johns).  Crush received an early wake-up call by losing its pool play match 5-3 against a talented JSerra-based Encore contingent coached by Cal State Fullerton head coach Mike Anse.  Coach Fox gave the start between the pipes to senior Dan DiPietrantonio (Foothill) who was supported by the all senior defense of Matt Marano (Foothill), Spencer Davis (Foothill) and Mark Hunsaker (Foothill).  Encore ran out to an early  3-0 lead that Crush could not come back from, losing 5-3.

The final game of pool play featured a grudge match between Crush (3-1) and Brady’s Bunch (4-0), who were fresh off their one goal win against Encore in their first round match.  In what proved to be the highlight game of the elite pool, Brady’s physical play and pin point accuracy got them out to a quick three goal lead.  However, the physical play, and inspirational goaltending by Blank seemed to wake Crush up as they fought their way back to lead at the half.  At the final whistle Crush earned their first win against Brady’s in over 7 years 10-9.

The Crush victory set up a three way tie for first between Brady’s, Crush and Encore (all 4-1), with Encore getting the #1 seed due to the lowest cumulative goals against.  Brady’s received the #2 seed and Crush the #3 seed.  The Flyers from Scripps Ranch in San Diego earned the #4 seed.  Encore won their semi-final in an exciting OT win versus the Flyers 5-4, and Crush easily took the rematch against Brady’s Bunch 9-4 setting up the all OC final of Crush versus Encore.

Both teams pushed aside the fatigue that comes with playing nine games in two days to entertain the fans with a remarkably well played game.  Cole Fergus (Foothill,Gordon College) set the tone for Crush early with his remarkable energy, scoring the first goal of the game before Nate Marano made it 2-0.  Logan Olmsted (JSerra, Colorado Mesa) closed the gap to 2-1, but five unanswered Crush goals (Kodzis, Steve Oberly, and three by Marano) put the game out of reach.   Jake Haigh (Foothill), Drew Boyd (Foothill) and Matt Harris (Foothill) led a tireless mid-field crew and defensive middie Chris Reem (Foothill) and LSM Jared Copeland (Foothill), both just back from football made significant contributions on defense.  Despite solid efforts from the JSerra trio of Olmsted, Jake Schleppy (High Point), and  Yuta Murata (Colby College),  and Trabuco Hills’ Jake Marthens, Crush’s trademark depth proved too much for Encore. The Foothill (+1) OC Crush took their 2nd consecutive Palm Desert Lacrosse Classic Title 9-4.

Interesting observations included a very talented Servite-base Angel City Hounds playing the top seeds close and showed that Servite may be a team to watch this year.    The Crush and Brady’s Bunch will return to the Coachella Valley for the January 16-18 2015 Sand Storm tournament where they will compete  against club teams representing Corona del Mar, and other top teams from the OC, San Diego, Los Angeles, and the Bay Area.