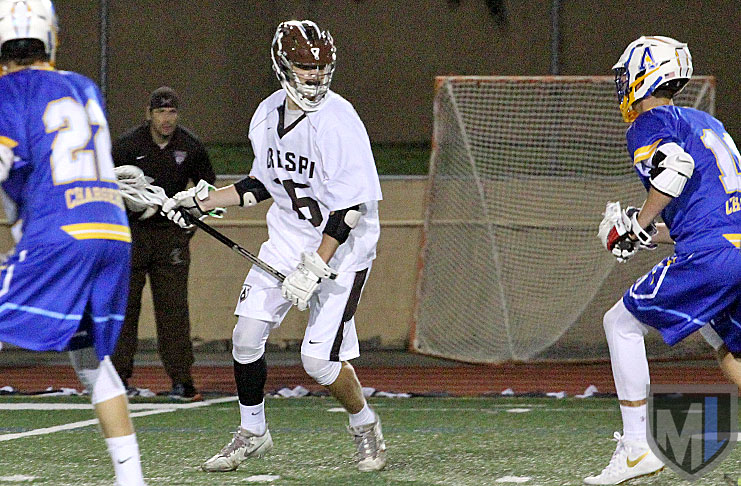 Logan Soelberg, a sophomore middie at Crespi Carmelite, has announced his commitment to attend and play lacrosse at the University of Maryland.

As a freshman last season, Soelberg scored seven goals in the Celts’ first seven games before breaking his collarbone. He returned to action late in the season and finished with nine goals and an assist in 10 games. He scored one goal in Crespi’s season-opening loss to Agoura on Saturday.

But top performances on the club circuit — and increased size and strength — since last season generated a lot of interest. Soelberg plays for Factory Lacrosse and the LA Heat and has attended events with Legends Lacrosse. Previously, he played for the Santa Monica Dragons. In January, Recruiting Rundown included him on a list of standouts from the Adrenaline Challenge.

Soelberg answered some questions about his commitment via email:

What made Maryland the right choice?

“When I visited Maryland, I immediately fell in love. The business school and entrepreneurship programs at Maryland are stellar, while being one of the top lacrosse schools in the nation. The combination of academics and athletics, along with the big-school feeling, is what made Maryland the right choice for me.”

What other schools did you consider or visit?

“I was lucky enough to visit a number of schools, and I was seriously considering Hopkins and Drexel. Drexel is an up-and-coming program, and Hopkins is led by Coach [Dave] Pietramala, a hall-of-fame player and coach, and the school has so much lacrosse history — and national championships. I really liked both schools, but Maryland really blew me away and is where I felt I belonged.”

What do you want to work on (or accomplish) in the next few years?

“Something I am always working on is being a great feeder. The more I can help my teammates produce goals, the better it is for all of us. I’d much rather score one goal and dish out four assists and win, than score three goals and zero assists and lose. As a team, we want to be back in the playoffs this year. We have a lot of talent on this team, and we are hungry after last year.”

Crespi coach Brock Livingston said Soelberg’s growth, both on and off the field, has been impressive.

“He has matured a lot as a player,” Livingston said, “and he has grown like three inches! I am so proud of him. He really thought it through, didn’t just make a snap decision. He had other schools, like Hobart and Drexel and some smaller schools talking to him, but the No. 1 thing that he kept saying was he wanted a good degree from a good college when all is said and done. I love the kid!”

Livingston also noted that Soelberg is only a sophomore, and that Saturday’s season opener was only his 11th varsity game. He has a lot more games to play before heading to Maryland.

“He still has a lot to learn, including not worrying about stats and stuff,” Livingston said, “but that’s kind of how a lot of kids think out here I think. They need to understand their self-worth is not determined by how many points they have at the end of the season. He will figure it out, but it rattled him last night a little that he wasn’t able to get the ball that easily. He is only a sophomore, so he will learn.”

Soelberg, voted one of four captains by his Crespi teammates, is the second Class of 2019 commitment from the LA area, following Oak Park middie Max Manyak‘s commitment to Notre Dame. Ryder Mora, a senior middie at Loyola, is committed to Maryland in the 2017 class.

Proud to announce my commitment to play D1 lacrosse at the University of Maryland🐢Thank you to my family, teammates, and coaches that made this possible!! #GoTerps #FearTheTurtle