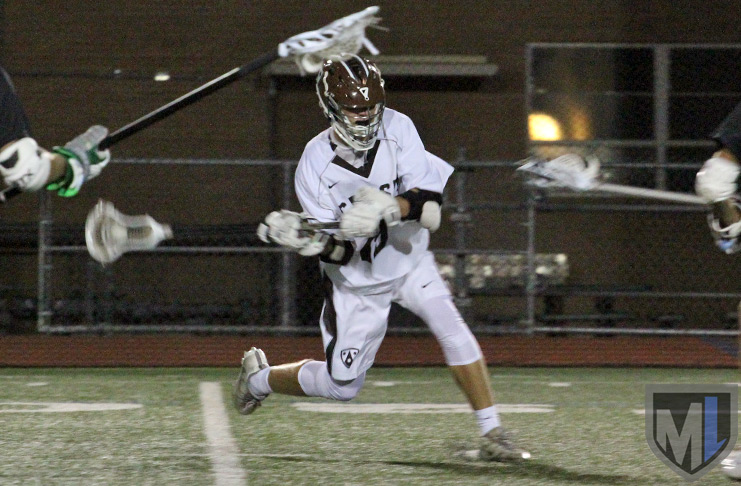 Eighteenth-ranked Crespi carried a 10-7 lead into the fourth quarter and held off a strong late push by visiting No. 13 Mira Costa to post a 10-9 victory. The Celts (1-1) lost their opener Saturday when visiting Agoura rallied from a 9-6 deficit to win 10-9 in overtime.

Mira Costa did its best to hand Crespi a second heartbreaking loss, scoring twice in the final 3:13 to pull within one, but this time the Celts were able to run out the clock.

Sophomore middie Logan Soelberg (pictured) scored five goals for Crespi, which built a 5-0 lead in the game’s first seven minutes only to see the Mustangs (1-1) come racing back to tie 6-6 at halftime.

Crespi re-took the lead early in the third period on Soelberg’s fourth goal, then stretched it to 8-6 on a goal from senior Jake Milkovich, but Costa’s Casey Bonner got that one back with a man-up goal. Soelberg’s fifth goal re-stored the two-goal cushion at 9-7, and senior Rafa Francisco flipped in a rebound to make it 10-7 heading into the fourth quarter.

Crespi benefitted from a huge possession advantage behind face-off middie Joseph Abu Dalu, who won 19 of 23 draws. Senior goalie Jonah Enos made 11 saves, including three in the fourth quarter.