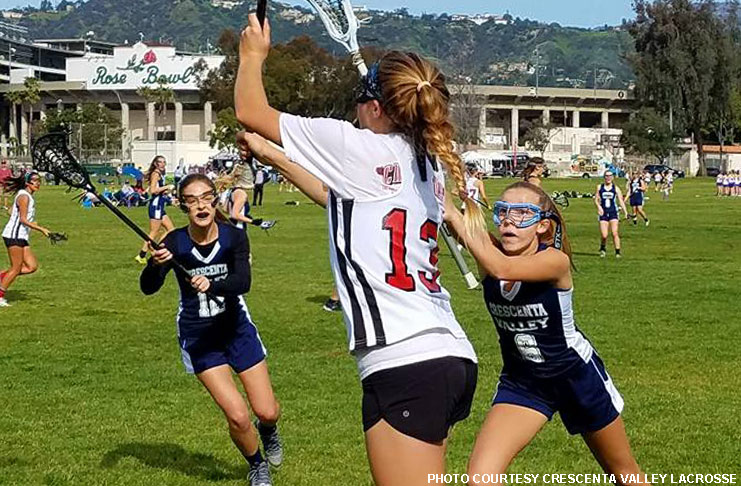 The first two weeks of the season haven’t been easy for the girls from No. 14 Crescenta Valley, who have played seven games in 10 days — including four against teams in the Top 10 of the US Lacrosse/MaxLaxLA preseason coaches poll — and come through that stretch with a 4-3 record (2-2 in non-tournament games).

The results have CV coaches Boz Crowther and Eitye Sheklow feeling good about their team’s prospects.

“We knew what we were doing with our schedule,” Sheklow said. “Redondo was the team that ended our season last year, so we wanted them first up, so the girls could see how far their hard work in the offseason took them. We included Thousand Oaks and Mira Costa early, because we feel they’re the level we should be running with. PV was luck of the draw in the Jamboree, but the girls stepped to the challenge and showed what they’re made of.”

With six of their remaining 11 games slated against teams in preseason Top 20, the road ahead isn’t any easier, but the Falcons relish the opportunity.

“This is competition; we’re not going to back down from a challenge,” Crowther said. “You might as well ask what
monkey-chow is for. We know that as a third-year squad there’s no upside for the top-tier teams to schedule us; we have to earn the right to schedule them next year.”

Next up for CVHS is Marlborough School on Tuesday, followed by the Falcons’ home opener against preseason No. 17 Westlake on Friday.