Crescenta Valley Bounces Back with Upset of Birmingham 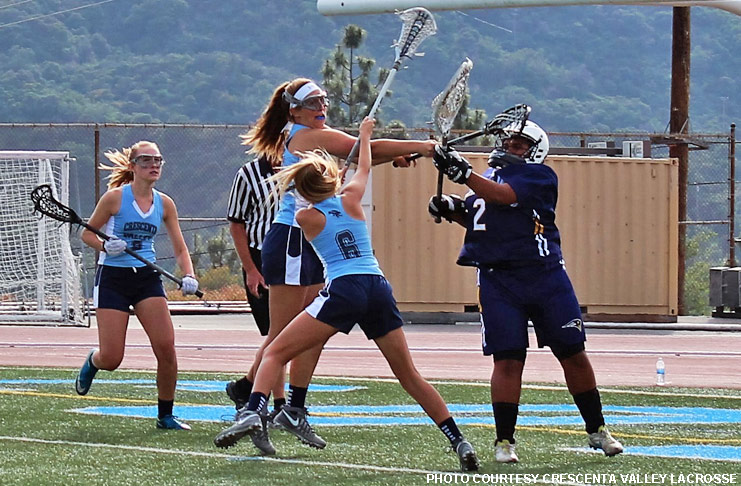 The 14th-ranked Crescenta Valley Falcons, smarting from a tough loss at West Ranch on March 30, played host to No. 7 Birmingham on Friday and emerged with a decisive 12-7 victory over the Patriots.

The Falcons improved to 6-3 with the win, while the loss dropped Birmingham to 9-5.

Crescenta Valley opened the scoring 47 seconds into the game with a goal from their season points leader, senior Abby Sheklow, off a feed from sophomore Lexi Ballard. The Patriots answered two minutes later to tie
the game, but the Falcons scored the next four and didn’t look back.

Crescenta Valley led 6-2 at halftime and built its advantage to 12-4 with less than ten minutes to play. The Patriots mounted a late surge, scoring three goals in the last five minutes, but it was too little, too late.

“We knew they were fast in the midfield,” CV head coach Boz Crowther said, “and that was a big part of what hurt us against West Ranch. We put a lot of time into fast-break defense leading up to the [Birmingham] game, and the girls’ hard work definitely paid off.”

CV assistant Eitye Sheklow added, “We’ve felt all year that we’ve been under-rated, and another win over a team that’s been in the Top 10 this year bears that out. With the meat of our season coming up, though, we have to make sure we don’t let down.”

The Falcons play host to Simi Valley on Wednesday, then close their regular season with league games against La Canada, Glendale, West Ranch, Westridge and Valencia.