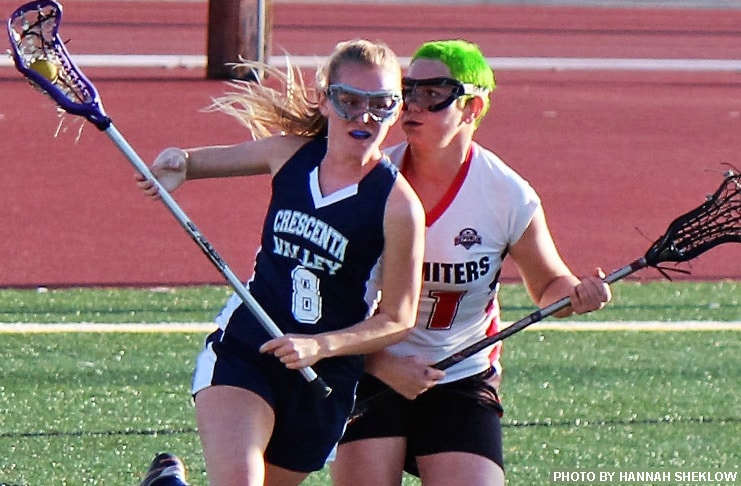 Two years ago, as a first-year program, Crescenta Valley lost to Glendale twice, 19-5 and 13-4. Last year, it was much closer, with CV losing to the Nitros 9-8 in overtime. Tuesday, ranked No. 10 in the coaches poll, the Falcons visited No. 11 Glendale and came away with a 15-8 victory, a strong measure of how far the team has come in a short three seasons.

“It was a great win for us,” Falcons assistant Eitye Sheklow said. “We have the utmost respect
for the team [Glendale] Coach [Joe] Campbell has put together, and we’ve been looking up at them for
most of our first two seasons. To be able to put it all together in only our third season is really gratifying.”

After falling behind 2-0 in the first six minutes of the game, the Falcons went on a 13-minute, 7-goal
streak to lead 7-2. The teams then traded goals in the final two minutes of the half, and CV led 8-3 going into
halftime.

The script flipped in the second half, with the Falcons scoring the first two goals to extend their lead to 10-3, and the Nitros answering with 3 of their own to cut the lead to 10-6 with 11:12 remaining.

At that point Falcon senior attacker Leah Crowther went on a streak of her own, tallying four of the Falcons final five goals, the last coming with 1:26 remaining off an assist from sophomore midfielder Francesca DiMundo. Glendale’s
last two goals came in the final minute as the Falcons emptied their bench.

“It’s been taking our defense a bit to get the measure of the other team in the last few games,” Falcons coach Boz Crowther said, “but we never panic. We know that they work well as a unit to shut down opposing offenses, and that we need to let them do it. Combine that with an offense of our own that typically has five or six players contributing goals, and we’re tough sledding for anybody.”

Next the Falcons face their third of four league games in a row, hosting No. 15 West Ranch on Friday at 4 p.m. The
Falcons and Wildcats met a month ago in a nonleague game, with West Ranch winning 12-10.