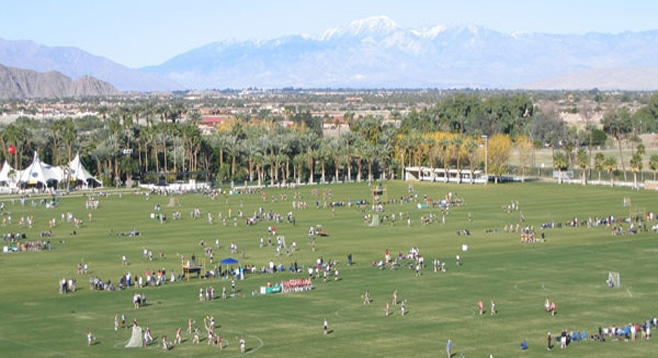 MaxLaxOC will be covering the 2014 Sandstorm Lacrosse Festival at the Empire Polo Grounds in Indio Jan. 18-19. Tune in for daily recaps, pictures and even some aerial flyovers.

Orange County will be well represented at the Sandstorm Lacrosse Festival in Indio this weekend. With over 250 boys and girls teams attending this year, Sandstorm has grown to become on of the premier events on the Southern California lacrosse calendar. MaxLaxOC.com will make the trek out to the desert to cover this year’s action at the Polo Grounds and as always we will be focusing our attention on OC teams and players. OC teams that will be competing in the High School Division are 3d OC, Brady’s Bunch, FCA, Kings Lax Blue, and Orangemen Orange. The Elite Division will see OC affiliated teams 3d SoCal, OC Crush, Brady’s Bunch Elite, DH Lax, Kings Lax Gold, and FCA Orange challenging a field of 18 to win the title. With the high school season just around the corner, coaches and players are ramping up to mid-season form so the action is sure to be fast and furious.

And although the Palm Springs area is not mentioned in the same breath as Long Island, Baltimore, or many other places when the topic is lacrosse hotbeds, slowly but surely the rest of the country seems to be catching on that there are worse things to do in January than watch or play lacrosse in the Southern California desert. This year FCA and DH Lax will be fielding national caliber teams. DH Lax Elite will feature a roster full of Division 1 recruits from the OC to Long Island and Baltimore.

The following press release provides more details on the event:

Annapolis, MD (January 9, 2014) – Organizers with Synapse Sports and Lax West have announced the seventh annual Sand Storm Lacrosse Festival, being held Jan. 18-19, at the Empire Polo Club in Indio, Cal., has been expanded to include competition on 40 fields. A record 250 boys’ and girls’ teams – comprised of middle and high school players – are slated to compete in the 2014 event co-sponsored by Under Armour and Gatorade. “We knew when we started Sand Storm in 2008 that it had tremendous potential. A warm weather location, state-of-the-art facility, top-notch competition and detailed organization are the ingredients for success,” said Cathy Samaras, found and CEO of Synapse Sports. “Sand Storm lived up to its potential and exceeded expectations since the beginning. Now it has become a destination event for club teams throughout the country as the premier winter tournament on the West Coast.”

Sand Storm began as a girls’ club tournament geared primarily towards clubs from Western States. It has since expanded its reach and now includes a significant number of teams from the Midwest, East Coast and even Canada. The number of Division I, II and III collegiate coaches scouting talent at Sand Storm has also increased significantly in recent years as the talent pool expanded. Sand Storm added a boys’ component in 2011 and it has grown exponentially under the guidance of Michael Watson of Lax West. In just four years, the boys’ tournament has grown from 14 to 112 teams. “It’s a testament to the overall quality of the event. Every team that participated the past two years had a great experience and it has spread by word of mouth that Sand Storm is a top-notch tournament in terms of a spectacular venue, precise management and strong competition,” Watson said. “A weekend in Palm Springs is very appealing to the out-of-town teams. I couldn’t be more thrilled with how quickly this thing has taken off.”