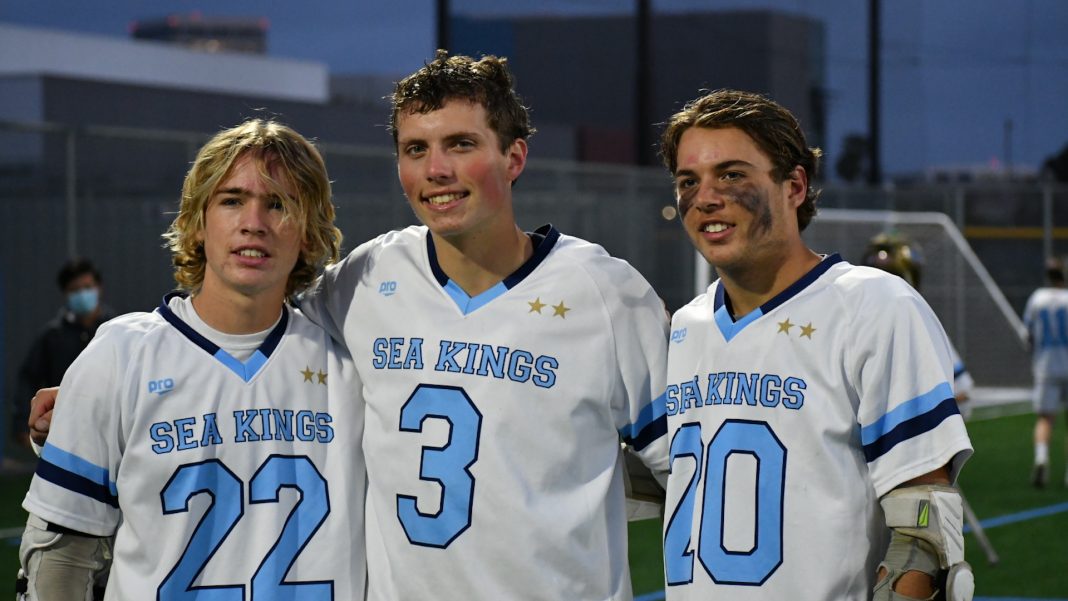 The Sea Kings came out firing offensively and defensively – they led 5-0 at the end of the first quarter and were up 8-1 at halftime. Ty Caffarelli got the Sea Kings started with an unassisted goal, followed by an immediate score by senior Jake Fuentes on a nice feed from junior attack-man, Nick Peloso.  Senior goalie Wyatt Rieden had six big saves in the first half to backstop a stingy team defense. The CdM defense remained solid all game, forcing turnovers and winning ground balls, pitching a shutout until TP finally scored with 1:30 seconds left in the first half.

Torrey Pines tried to get things rolling in the second half, picking up two quick goals to close the score to 8-3, but CdM’s offense had an answer, as the Kings kept the pressure on the Falcons with a perfectly executed and pivotable man up goal as the Kings passed it around the horn a few times, followed by a threaded pass from junior Lucas Newton to junior Logan Ip, putting the Sea Kings up 10-3.

Torrey Pines closed the score to 10-7 in the fourth quarter but it was the Sea King defense and goaltending that sealed the game. Junior defensemen Tucker Jackson (7gb) and Tyler Brown (5gb) came up big on defense with 12 ground balls between the two of them and senior Rieden finished the game with 9 saves.

In a matchup with multiple committee Division 1 players on both sides, it was great lacrosse play and coaching from both teams. It’s hard to pick a clear lacrosse favorite this year in Southern California, setting up for great CIF playoff battles later this month.