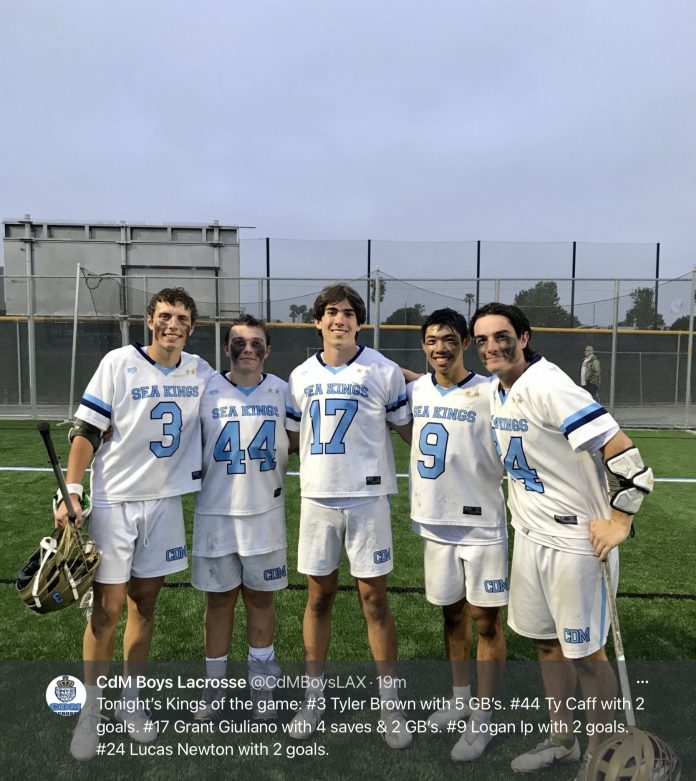 Corona del Mar advanced to the CIF semifinal game after beating cross-town rival St. Margaret’s in a rematch from earlier in the year when SMES defeated the Kings in overtime. This time it was the Sea Kings who came out on top in a low-scoring defensive battle that ended with a 7-4 win for Kings. The Sea Kings have won 10 straight, are playing great lacrosse right now, and seem to be getting better with each game.

St. Margaret’s had the early advantage with Owen Binder (1g) and Seth Forstot (1g, 1a) giving the Tartans a 2-0 lead as the first quarter came to an end. Forstot’s goal came courtesy of a nice feed from Koa Todd (1a) who disrupted the CdM defense with a slick dodge and then found the open Forstot.

The Sea Kings were able to knot things up by halftime. One goal each from CdM’s Big Three of Logan Ip, Ty Caffarelli and Lucas Newton offset a Matt Groeninger (2g) tally to close the first half in a 3-3 tie.

The second half was all Kings, as the defense stepped up and held the Tartans to just one Groeninger goal in the second half.

Newton, Ip and Caffarelli each had 2 goals, while Oliver Ayala had 1 goal.

Up next for the Kings is a semi-final game this Friday versus Loyola. The Tartans look forward to 2022.