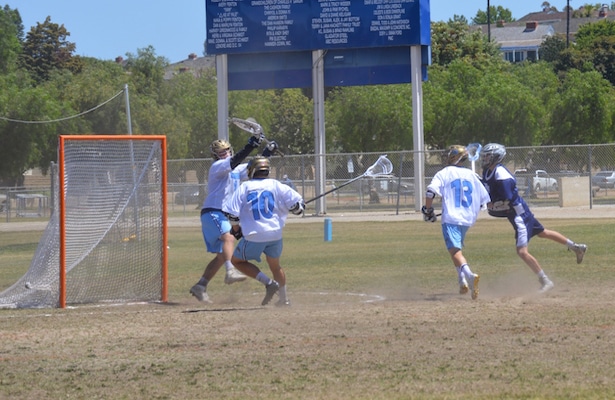 Being an equal opportunity lacrosse team, No. 1 Corona del Mar did to No. 14 Servite what they have done to every other team from Orange County they have faced this season. The Sea Kings beat them.  With Jason Simaan and Matt Saucedo teaming up to win 15 of 21 faceoffs (71%) and the defense locking down, CdM pulled away in the middle quarters to earn a 15-4 victory.  CdM’s only loss this season was to Torrey Pines, the no. 1 team in San Diego according to the MaxLaxSD.com\Union Tribune Coaches’ poll.

Jordan Greenhall, who was one of four Sea Kings to register at least a hat trick, led all scorers with seven points (3g, 4a).  Stephen Von Der Ahe  (4g, 1a), Ryan Meckler (3g) and Eric Fries (3g,1a) were the other big scorers for CdM.  Sachin Gokhale (1g, 1a) and Simaan (1g) also scored.  Brennan Greenwald and Simaan each scooped up five groundballs.  Nick Guizan had a quiet night between the pipes, facing only seven shots on goal.