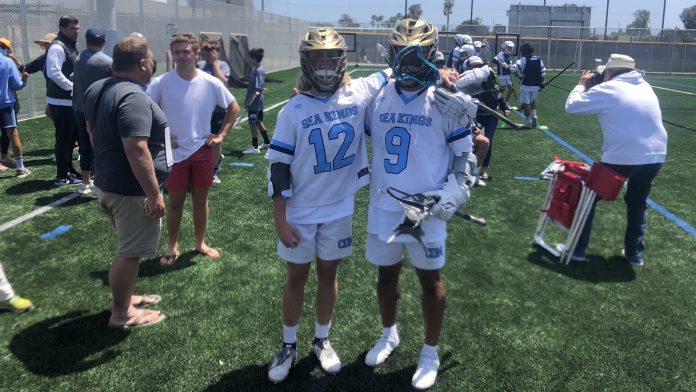 Logan Ip (pictured right) scored the game-winning goal in overtime as the No. 4 Corona Del Mar’s boys lacrosse defeated No.2 Mater Dei 9-8 on Saturday at Corona Del Mar High School. The Sea Kings won their eight game in a row to close out the regular season.

Ty Caffarelli led the Sea Kings with three goals while Gavin Gossen (pictured left), who scored the game-tying goal to send it to overtime, added two goals. Ip, Nic Peloso, Shawn Fromme, and Lucas Newton each found the back of the net once for CdM, which got five saves from Grant Giuliano.

“From a team standpoint, it’s a great win and the kids had a lot of fun playing hard together and that’s why we do it,” Sea Kings coach G.W. Mix said.

The game had a playoff-like atmosphere, as the game drew a good amount of supporters from both sides. The opening quarter saw both teams trade goals, as they went into the second quarter tied 2-2.

Like a majority of the Monarch’s games, their defense clamped down, as it made it tough for the Sea Kings to get a shot of cleanly or maintain possession for an extended period of time.

Goals from Tommy Bethel and Grant Portillo gave Mater Dei the lead at 4-2 halfway through the the second quarter. After Fromme scored at the 5:03 mark to cut the lead down to one, Portillo scored his third goal to give the Monarchs a 5-3 lead at halftime.

Mater Dei led 6-4 halfway through the third quarter when its defense held CdM off the board the rest of the quarter. Its offense surged late in the quarter, as Bethel scored at the 1:45 mark and Cole Crisostomo scored 34 seconds after, as the Monarchs led 8-4 going into the final quarter.

The Sea Kings scored eight seconds in as Caffarelli scored off of a pass from Ip and followed that up with another goal from Gossen, cutting Mater Dei’s lead down to 8-6 at the 9:23 mark. Gossen’s goal with 5:39 remaining cut the lead down to only 8-7 as the Sea King players and fans were excited about how their team was closing the gap.

Mater Dei got one more offensive possession to try and win the game, but CdM’s defense held on and forced overtime. In the overtime period, the Sea Kings eventually got the ball to Ip, who scored a tight angled goal, allowing the Sea Kings players and fans to storm the field.

“I think that everyone out there played their hearts out, starting with the defense. The defense really clamped down in the last quarter and everyone else stepped up and we came together as a team and that’s that we play lacrosse for,” Ip said.

Portillo and Bethel led the Monarchs with three goals while Crisostomo added two goals. They also got 12 saves from Nick Colignon.

“I think we needed a wake-up call. In the third and fourth quarter, I think we started to let the wheels fall off. We got a little complacent and weren’t able to execute because our heads weren’t in it,” Monarchs coach Johnny Rodriguez said.

Both teams have a first round bye in the CIF-SS Division 1 playoffs and will play at home in the second round on Friday.