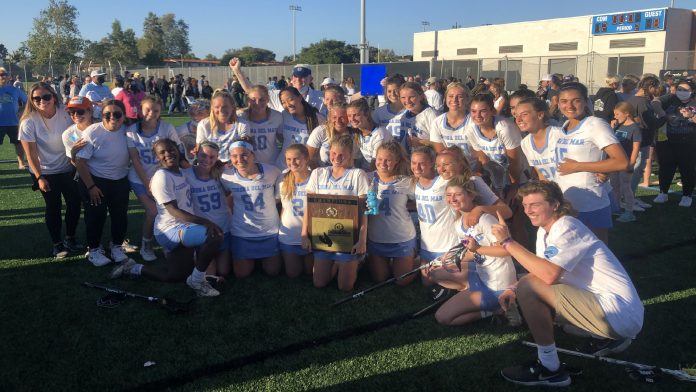 Frankie Garcia and Amanda Cord led the Sea Queens with three goals while Shelby Glabman added two goals. Abby Grace, Belle Grace Megan Schafer and Elysia Samen each had one goal for the Sea Queens, who got six saves from Ellie Spotts.

Masin Kearney and Natalie Ringdahl each had three goals for the Comanches while Sheridan Koenig chipped in two goals. Caitlyn Villanueva made five saves.

Wednesday’s meeting marked the second time the two teams met, as Canyon won the first meeting 15-7 on Tuesday May 4 at Canyon High School.

Early on, the two teams were neck-and-neck, as neither team held more than a two goal lead. With game tied at 1-1 in the early stages of the first half, Abby Grace scored at the 19:36 mark and Cord scored almost a minute after to gave CdM a 3-1 lead at the 18:44 mark.

Canyon answered back with two straight goals of its own as Koenig scored while the Sea Queens were down a player after receiving a yellow card and a little over two minutes later, Kearney scored the equalizer to even the score at 3-3. After the two teams traded goals, Belle Grace scored to give CdM a 5-4 lead at halftime.

The Sea Queens opened the second half in style with a goal from Garcia following an interception two minutes and 18 seconds in to give them a 6-4 lead. They eventually led 7-5 following a free position goal from Cord, but two straight goals from the Comanches tied the game at 7-7.

CdM knew it couldn’t keep trading goals with Canyon if it wanted to win, as it need to score consecutive goals. The Sea Queens eventually did so, scoring three straight goals with two coming from Glabman and one coming from Garcia, giving them a 10-7 lead at the 12:48 mark.

The Comanches didn’t score for almost 10 minutes, as Ringdah scored at the 7:32 mark to pull them to within 10-8. But they couldn’t get any closer as Cord and Schafer both netted insurance goals to ice the game and start the celebration, where they and the students stormed the field.

“This means everything. Not just everything we’ve worked for this year, but everything my team has worked for the past four years, especially last year losing the seniors and not getting a season,” Glabman said.

Glabman also made note of how CdM, an at-large team from the Sunset League, learned from its losses, not only from Canyon, but to league foes Edison and Newport Harbor.

Cord, a junior, gave credit to her older brother and former CdM boys lacrosse player Kyle, who helped out the team reach its ultimate goal.

“I look up to him, he’s such a good role model. He’s helped us so much this season and I’m really happy he really got to help us win this game,” Cord said.

Comanches coach Alison Cho was proud of her team despite the loss, as her team, only in its fourth year as a varsity program, made great strides this year, finishing second in the Crestview League behind Foothill and posting 18 wins.

“We’ve played every game really well and really hard, we’ve come together. But we weren’t able to pull it together for this game. CdM brought it today,” Cho said.

The Sea Queens began its playoff run in the wild card round defeating Mira Costa 9-5 at home and beating Marlborough on the road 16-3 in the first round. They followed that by defeating El Segundo at home 13-8 in the quarterfinals and beat Dos Pueblos on the road 12-5 in the semifinals.

Canyon, the second place team from the Crestview League, defeated El Toro 16-4 in the first round at home and followed up with a 14-7 home win in the quarterfinals. It then defeated Murrieta Mesa 12-11 in overtime on the road off of a game-winner from Ringdahl.