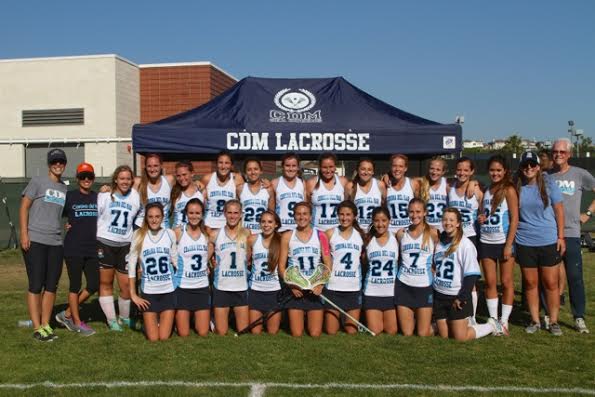 With a 16-15 upset victory, the Corona Del Mar Sea Kings beat the undefeated Foothill Knights in an action packed girls’ lacrosse game on Monday afternoon that was not decided until the final seconds of the game.

Foothill girls’ lacrosse ranks No. 1 in the state of California according to laxpower.com.  Fresh from a whopping 18-3 victory over a strong Beckman team earlier in the week, F it seemed Foothill was poised to continue its domination in the CDM game.  Instead, the Knights (10-1) suffered a tough loss against the senior-led Sea King team (9-3).

Hosted by CDM, the nonleague game was a battle royal.  The Sea Kings maintained the lead throughout the game with the scoreboard at 9-7 by halftime.  Leading the offensive scoring were captains Kacie Kline and Sabrina “Bean” Smith.  Draw control was an important contributing factor.  Foothill drawer Meridian Lee was out of town for spring break, so CDM capitalized by winning two-thirds of draws taken.

The second half was tightly contested, but CDM never relinquished even as Foothill began applying pressure all over the field.  In an impressive rally, Foothill caught up to tie the game 15-15 when senior Mallery Kiefus scored with less than two minutes left on the clock.

When the Sea Kings took back control of the ball, Foothill goalie Hannah Upshaw made a monumental save to stall the tie-breaker.  But as the clock counted down from one single minute, CDM maintained possession and Sabrina Smith was soon awarded an eight-meter shot.  She scored.

With only forty seconds left in the game, Foothill managed to push one last offensive effort.  They scrambled for possession by winning a couple ground balls.  Finally, captain Claire Healy was able to feed an open co-captain, Julia Taylor, for what seemed would be the game-tying goal.  Taylor scored with only two seconds left on the clock, but the goal was disallowed because of a crease violation.

Foothill Head Coach Kaylee Navarrette says the crease violation was a “controversial call.”  Though there may have been a discrepancy between referees, there was no chance to debate the controversy as senior CDM goalie Kate Allen held the ball for the final seconds of the game.  CDM in turn won their victory over Foothill.

Assistant Coach John Stuart from CDM said the team won by demonstrating “great focus” and being “fully, mentally engaged from the opening whistle.”  “Foothill has strength all over the field,” said Stuart,  “but I don’t think Foothill expected our intensity.”

There were several challenges noted by Foothill Coach Navarrette.  “Draw control was a challenge for us, but Julia Taylor really stepped up and helped us out,” she said.  The team was also missing key players due to spring break, “but the girls were still determined to play,” said Navarrette.

Despite Foothill’s determination, the tough loss against CDM stains their undefeated record.  The Sea Kings will look to continue their winning streak when they travel away to Temecula Valley this Wednesday.  The Knights will be out for blood when they host Esperanza on April 22.