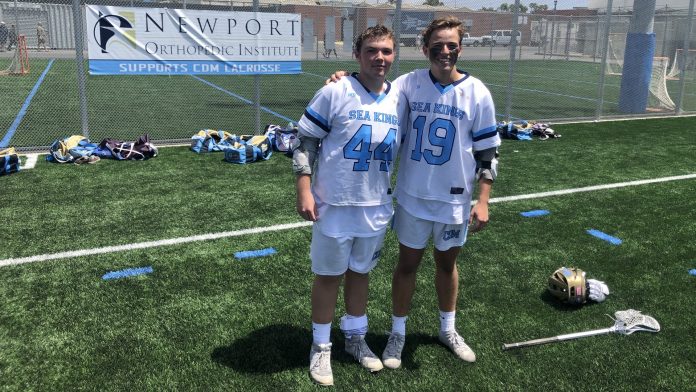 It had been 766 days since the two teams last met and the Sailors pulled off the win 5-4. This time, the Sea Kings had no intention of losing the rivalry game.

“We knew we had to play hard. When we play hard, we’re pretty hard to beat. They [Newport Harbor] presented some challenges for us and we addressed those before the game and we did what we needed to do,” Sea Kings coach G.W. Mix said.

A hot start benefitted CdM as well, as it scored the first six goals in the opening quarter. Newport Harbor didn’t get on the board until late in the quarter, when Luke Barnes drove to the net and scored a man-up goal with 25 seconds left on the clock.

Even in the span of 25 seconds, the Sea Kings still managed to squeeze a pair of goals out before the quarter ended, as Nic Peloso scored off of a quick pass from Logan Ip and Ty Caffarelli (pictured left) scored a behind-the-back goal. CdM almost got a third goal, but the shot was saved by Sailors goalie Jerome Snyder, who had eight saves.

The rest of the way, the Sea Kings shut out the Sailors, as they dominated possession, used their stout defense and won most of their faceoffs. Despite trailing 10-1 after a minute and 27 seconds passed in the second quarter, Newport Harbor did all it could to prevent the game from getting out of hand by shutting out CdM in the quarter.

Eventually, the Sea Kings pulled away from the Sailors to the point where Mix can rest his starters and put in his reserves to get some experience.

“It [the win] was great. It shows everyone was competing and everyone was communicating. We lost to them my senior year by one goal and what went through my head was, ‘I hope we can beat these kids, play harder than them, compete for every groundball and walk away with the win,'” Cord said.

Caffarelli led the Sea Kings with six goals while Jake Fuentes (pictured right) added three goals. Lucas Newton and Peloso each had two goals while Logan Ip, Shawn Fromme, Ryan Shafer and Gavin Gossen each had one goal for CdM, which got two saves from Wyatt Rieden and Grant Giuliano.

“We were pretty mad when we lost two years ago. I think everyone was going hard and just wanted it. It’s pretty special because we know a couple kids on their team, so we just wanted to bring it to them,” Fuentes said.

The Sea Kings (7-3, 2-0 in league) hit the road to face Yorba Linda in a non league game on Tuesday. Newport Harbor (3-10, 0-2 in league) resumes league play on Wednesday at Huntington Beach at 4 p.m.