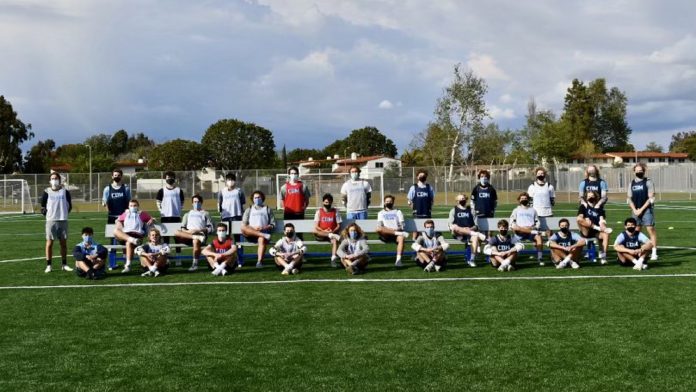 Having missed out on all but two games because of the pandemic last season, the Corona Del Mar boys lacrosse team enthusiastically enters 2021 with high hopes and a new lacrosse facility.

“It’s humbling to see these kids run around, play with their friends again and to be able to compete. It’s terrific,” Sea Kings coach G.W. Mix said.

The Sea Kings debuted 2021 and their new home field with an 18-8 home win over Servite last Saturday. The new facility comes courtesy of a $14.6 million renovation project at the school, which added two artificial turf sports fields and a rubber track.

“It’s a great and terrific facility. we love it.” Mix said, adding that his team will play on the back field where they primarily play their games.

The Sea Kings lost 13 seniors to graduation in 2020 but return a plethora of talent including junior captains Logan Ip, Lucas Newton and Alex Chanawatr.

Strong defense and goalie play is practically synonymous with CdM boys lacrosse and this year will be no different. Chanawatr is a versatile long pole who can make his presence known on both ends of the field. Senior Wyatt Rieden will be the man in the cage for this year.

“It’s fun. We’ve had a competitive schedule throughout the years and most of those teams we’ve played year-in and year-out, the kids look forward to those matchups,” Mix said. “It’s all about the kids [players] and giving them a chance to compete and letting them have fun competing at the highest level and we look forward to it.”

The Sea Kings begin Sunset League play on Wednesday May 5 at home against Edison. Mix expects teams such as Newport Harbor (home, 5/7) and Los Alamitos (away, 5/19) to give them a challenge, but know his team can’t take any team for granted.

“The reality of it is, we’re looking forward to every game, and I think we’ve learned from last year you can’t take any game for granted because you never know if it’s going to be taken away from you,” Mix said.