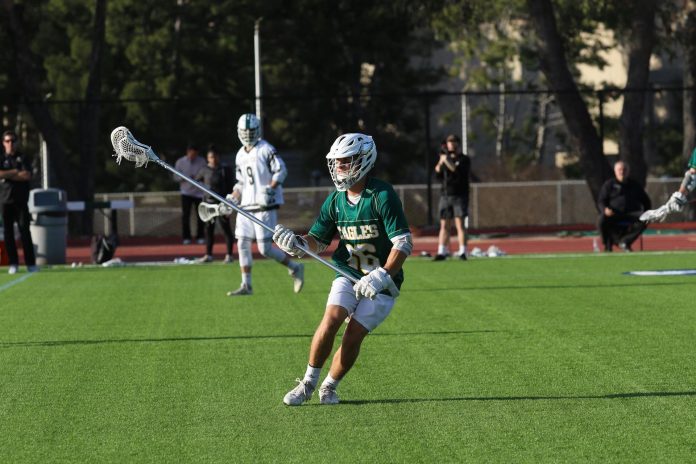 IRVINE, Calif. – The Concordia University Irvine men’s lacrosse team announced its incoming recruiting class on Thursday for the 2020-21 school year. The Green and Gold are welcoming 16 new student-athletes to the CUI Eagles family.

“This year’s incoming class is the largest and most diverse class we have brought onto campus,” said CUI head coach Jesse Foss.  “We have 13 incoming freshman and 3 NCAA transfers joining our program.  These players hail from four different states (California, Nevada, Oregon, and Washington) and we also have one international student from Australia.”

Ten of the 16 additions hail from the Golden State.  The class includes multiple faceoff specialists and a number of former team captains from the high school ranks.

“I believe the most important aspect of this class is their ability to play multiple positions,” added Foss. “This class has the talent to produce immediately and will be called on to step into important roles from day one.  We welcome our new Eagles players & parents to the Eagles family. GO EAGLES!!!”

Koa Afusia (Freshman – Segerstrom HS, California) – “Koa is a big, strong athlete that has the versatility to play several positions including defensive midfield, long stick midfield, and close defense.  He was a 4-year varsity starter and a team captain this past season at Segerstrom HS.  Koa received the Coaches Award in the shortened COVID season for his hard work and leadership. He has also excelled in the classroom as a 4-year member of the Academic Honor Roll.  Koa is still coming into his own as a lacrosse athlete and I believe he is going to thrive in our program the next four years.”

Jake Cloutier (Freshman – Chaminade College Preparatory, California) – “Jake is coming in as a very accomplished athlete with all the tool you want in a defenseman.  He was a US Academic All-American, Second Team All-Area selection, and his team’s Defensive MVP in his junior season.  A team captain at Chaminade he was also named Second Team All-Mission League in his 9th, 10th, and 11th grade seasons.  Jake may be the most college ready player in this class and will be expected to contribute right away.”

Travis Jones (Freshman – Centennial HS, Nevada) – “Travis is a long stick midfielder that is also skilled at taking face offs.  He has the athleticism to cover the ball, the speed to push between the boxes, and the stick skills to be a scoring threat.  Travis is a coach’s son so he has a great understanding for the game.  His ability to face off makes him a dangerous weapon and a great 1-2 punch with our other talented face off players.”

Eric Obispo (Freshman – Centennial HS, Nevada) – “Eric is a crafty right-handed attackman that has the ability to also play midfield.  He was a 4-year Varsity starter at Centennial HS and was lighting up the scoreboard prior to the COVID shut down.  I love the Vegas players!  They are tough and aggressive.  Look for Eric to give us a look coming out of the box at midfield.”

Riley Slumskie (Freshman – Beckman HS, California) – “Riley is another versatile defensive player that can play several positions including defensive midfield, long stick midfield, and close defense.  He lettered on the varsity team for the last 3 years and was named a Scholar Athlete.  Riley brings an attitude and effort that will make us better and will find a way to contribute right away.”

Chad McFadden (Freshman – Santa Margarita Catholic, California) – “Chad is a talented left-handed attackman that has all the tools to be successful at the collegiate level.  His frame makes him a tough defensive cover and he is deceptively quick.  His ability to play with & without the ball in his stick will allow us to put some new wrinkles into our offense.  I have gotten to see Chad play several times this past year and more impressed each time.”

Justin DeFoe (Junior Transfer – Johnson & Wales, California) – “Justin is coming from NCAA DII where he was named All-SCAC Second Team Defense and a team captain as a freshman.  Before college, Justin was a standout at Huntington Beach HS.  With the loss of Connor Reed on the defensive end we will need some experienced players to step in and Justin has already shown he can excel at the collegiate level.”

Drew Buckley (Freshman – Mater Dei, California) – “Drew is a smooth off-ball attackman with soft hands and great understanding of timing and space.  We were missing an inside presence in the offense in 2020 and Drew has the skills to give us a great option inside.”

Matt Pinto (Freshman – Santa Margarita Catholic, California) – “Goalie is arguably the hardest transition from high school to college.  With returning starter, Tyler Schweickert, back for one more year Matt will have time to adjust and have a great teacher to learn from.  Matt has battled back from numerous injuries and has the resolve to keep pushing on.  He is a team-first guy that is going to be a great addition to the Eagles program.”

Ben Mungai (Freshman – Beaverton, Oregon) – “Ben is a pass-first attackman that always has his head up.  He has a deadly combination of speed, quickness, and a polished stick to go along with a high lacrosse IQ.  Ben was a two-year captain and a 2nd team All-Metro selection as a junior.  His athleticism affords us the opportunity to play him at attack or midfield.  Look for Ben to find himself on the field early in his career.”

Dylan Courchaine (Freshman – Crespi Carmelite, California) – “Dylan has everything you are looking for in a defenseman.  He is tall, rangy, and has a great stick.  He has good footwork & speed and comfortable pushing the ball in the clears.  Watching Dylan play several times this past year I see a ton of potential and believe he will develop into a very good college defenseman.”

Garrett Burns (Freshman – Central Valley HS, Washington) – “Garrett is a match up nightmare for teams whether he is playing attack or midfield.  He is 6’5” and can dodge to shoot or feed.  Garrett has a rocket of a shot that can stretch a defense and open things up for our crease players.  He did not get much of a senior season due to COVID but was selected 2nd team All-Conference as a junior.  Garret is a coach’s son and has a high IQ and understanding for the game.”

Nick Placek (Freshman – Crean Lutheran, California) – “Nick is a defensive swiss army knife.  He can play just about anywhere and will be asked to play several positions this year.  Nick has excelled on the field and in the classroom where he was a 3-year Scholar Athlete at Crean.  Nick has unlimited potential and I believe he will excel at CUI.”

Cade Poe (Freshman – Los Alamitos HS, California) – “Cade is one of the best face off athletes in Southern California.  He was the runner-up at the Face Off Academy National Showcase for the 2020 class.  This past year he was the focus of every opponents’ game plan before being shut down by COVID.  In addition to lacrosse, Cade is an accomplished wrestler.  He was the Sunset League Champion and a CIF State Qualifier at 138 pounds.  Face off has become the most important position in lacrosse, and I feel confident for the next four years knowing we have Cade.”

Mason Dalbeck (Sophomore transfer – USMA West Point, Washington) – “Mason is a player I recruited out of high school, so I was thrilled when I was able to get him back.  He is extremely athletic and has a low powerful frame that allows him to get under defenseman.  Mason was a two-time team captain and All-Conference selection at Wenatchee HS.  His toughness & athleticism will be welcomed on a midfield that lost two starters in 2020.”

Xavier Fiotentini – (Senior transfer – Notre Dame De Namur; Australia) – “Xavier is another player I recruited at my former college, so I am thrilled that I will finally get him with us.  The Melbourne, Australia native spent a year at NDNU before the school shut down.  Xavier has a passion for the game and his energy will be a welcomed addition to our team.