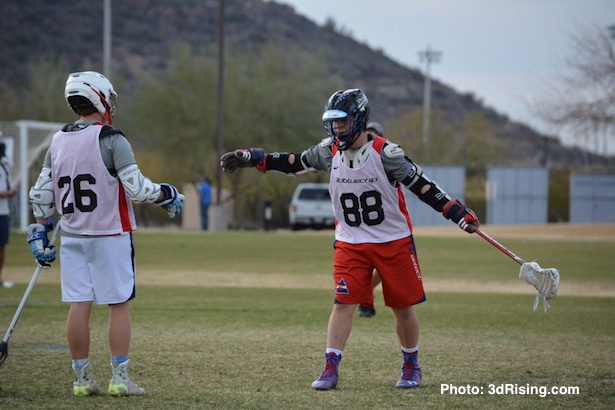 3d Rising’s Casey Vock was clearly impressed by the depth of lacrosse talent in Colorado when he attended the 3d Blue Chip West Regional Camp in Phoenix in January. Over 400 players from around the west attended the event that serves as both a training program and a feeder program to the prestigious Jake Reed Nike Blue Chip Camp held each summer in Maryland. Strong performances at the Regional Camp can earn players an invitation to the summer Blue Chip camp.

In a recent 3d Rising article, Vock offered his observations on the players that stood out to him. Coloradans domintated his list Vock is careful to emphasize that his evaluation is “SEPARATE from the evaluation and selection process at the 3d Blue Chip camp. Being highlighted by 3dRising.com does not indicate that a player has or has not been selected to attend the Jake Reed Nike Blue Chip Camp.”

Hancock showed himself to be a quick, shifty, slashing dodger of a midfielder who appears to have a full bag of hybrid lacrosse skills: lever passes, pump fakes, wind-ups, hesitations, the ability to redodge after resetting himself up to attack again after an initial dodge. He’s not big, but plays with IQ and plays fast every possession. He used his ability to redodge to get underneath defenders. We watched him score a leaner goal. He fought for groundballs showing toughness and hustle. And the lefty battled on defense. He was banged up Sunday but impressed in the time we saw him Friday and Saturday through the training and instruction and then into game play.

Sawyer had a good run at the 3d Blue Chip West Regional Camp as a hustler with the long pole who showed well in the middle of the field and on the back half of the field. He was excellent running off the wing line during the draws. He was quick to groundballs and showed a good handle, pump faking when he was clearing to give himself some room and time to further the clear. He was smart when working the ball in transition, making a pass that resulted in an easy one-more to set up a goal. He showed an awareness of his man and the ball when playing off the ball, with his head on a swivel. He worked the ball carrier pretty well too when playing the man. Sawyer had a good weekend overall.

Quillen proved himself to be a good time-and-shooter and a player who likes contact and is excellent inside, which he demonstrated at the 3d Blue Chip West Camp. We watched him step in a unload with his hard right-handed shot. He later caught a pass outside and in a big winding motion ripped a sidearm shot to the top right corner. He showed the ability to catch and finish inside with little room and with contact. He almost seemed to enjoy and desire the physical play. Quillen proved to be one of the better pure goal scorers at the event.

Thornton had a strong 3d Blue Chip West showing with a good weekend full of saves. He was very consistent on shots coming from 12 yards and out, making those saves look routine. He also showed himself to be quick and hard to beat in tight, dropping low to deny some high-percentage shots on the door step. Thornton threw good outlet passes and was comfortable in the clearing game.

McFarlane showed well at 3d Blue Chip West as an athletic presence in the midfield who can dodge and get up and down the field and make plays. He’s talented with his stick when carrying up the field and can pull off the acrobatic play. On offense, he is patient, but shows his athleticism as dodger. He showed a good left-to-right split at the 3d Blue Chip West camp.

Wides is a good-sized goalie who hugs the pipe really well and showed good overall speed and athleticism in and out of the cage. He gets big in the cage and doesn’t give shooters a lot to work with. He stood out in the clearing game, even taking the ball the length of the field to score an unassisted goal.

Capps displayed good feet through the weekend and showed athleticism in the way he grabbed groundballs and played defense. He was solid on the ball and used his decent size to play tough and could be tough to move. He is skilled with the stick and showed that in his ability to come up with groundballs quickly. Capps had a good overall showing at 3d Blue Chip West.

Billings made a strong impression in the 2020 group at the 3d Blue Chip West camp as a smooth, athletic and good-sized player who can put pressure on the ball up the field, out on the perimeter and up top. He showed all kinds of promise in transition, handling the ball well and with confidence. He is fast in the open field and got to show that off a bunch of times; he was anywhere the ball was on the field. He was excellent in the clearing game, throwing a bunch passes up the field on the money. He threw a lever pass into the mix. He was one of the most impressive defenders in the middle of the field at the West camp.

Waldbaum had a great weekend the 3d Blue Chip West Regional Camp as a skilled young defender and playmaker. A high-IQ, sure-handed player, Waldbaum shined as a longstick who keeps his stick under control with his checks, puts his stick on his assignment’s hands, moves his feet well on the ball and throws disruptive checks. His approach is under control and he uses his good size (already about 5-foot-11) to his advantage by getting big but keeping his base when he presses out. We watched him strip the ball from some of the better players at the camp. He can beat people up if he gets them hung or they stop moving their feet. He is talented in transition and his box experience shines as he can pump the stick effectively and handles it like a twig, getting through traffic and checks on a few clears we witnessed. He led numerous breaks that resulted in goals for his team. He chokes up on the handle and really protects the stick well when he carries. It allows him to create chances on offense and almost demand the attention of a short stick. He can hang around and is a threat to score from atop the box because of his quick release and accuracy. Waldbaum finished the weekend on a high note, showing off fantastic stick skills in his final game and capping it with a highlight-reel diving goal.

Hussey had a good weekend at 3d Blue Chip as a tough young player who can absolutely rip the lacrosse ball. He can unload from just about anywhere and shows excellent form on his windup, with tremendous overhand torque. He scored a goal with just seconds on the clock in one half of a game, sending it into the high part of the net from what looked like outside of the box. Later, one of his shots beat the goalie and then went through the net. Hussey is a good-sized player who can also shoot it on the run. He took a couple shots with his left too, and showed good overall athleticism. Hussey was unselfish in the way he distributed the ball. Elsewhere on the field, his play was gritty and he was hustling to get after the ball when it was on the ground.

Landymore had a productive showing at 3d Blue Chip West as a slick, talented offensive player who showed off all sorts of different skills over the course of the weekend. He was aggressive with the ball and looked to make plays. He fed the slip for a great look, one of several he’d make. He scored on an outside shot. He cut off the ball, caught and scored. He scored a step-down shot. He showed IQ in the two-man game. His shot was hard and accurate and with a quick release. He buried a twister shot after cutting to space. He lifted the ball off the ground and into the high part of the net in one motion when it was on the turf for an impressive goal. He intercepted a pass while playing defense. He showed shiftiness as a dodger. He did a lot and stood out for his efforts.

Douglas is a talented, tall and lanky young attackman with some big upside thanks to his high IQ and good stick skills. The younger brother of a Division I commit, Douglas scored in all sorts of impressive ways at 3d Blue Chip West. He is excellent working around the cage and posting up with his tall frame, working to get above GLE and looking into the defense for an opening. He uses his back well and can keep his balance while working against a defender. His good stick allows him to put good passes out to teammates. He faded away to bury a shot. He scored a slick behind-the-back goal. He scored on an off-ball cut. He got topside and rolled across the crease to score. Douglas showed an understanding of how to work the slip. He had a nice overall showing at the camp.

Allen had a good showing in Phoenix at the 3d Blue Chip West Regional Camp. An athletic midfielder with a good set of wheels, he showed face-off skills and scrappiness. With the ball, he showed a good shot on the run and scored on a right-to-right split into a jump shot. As time went on, he showed passing abilities and a wider ranger of skills.

Kay had a great outing at the 3d Blue Chip West Regional Camp as a big attackman who feed and finish the ball with skill and craftiness, which makes a player of his size a tough matchup. He showed the ability to turn the corner and push against his defender going hard from X. He scored a low angle goal on a drive from X. He got topside and essentially dunked the ball on one play. He was also able to find space and catch and finish on a number of plays. One of those saw him catch with his left and then spin outside and curl to his right hand to hit the top shelf. He scored another goal driving hard to his left and using an inside roll to his right hand. Kay was one of the more talented and productive attackmen in this 2020 group.

Watts showed off good hands and finishing abilities at the 3d Blue Chip West Regional Camp. He pulled off numerous tight finishing, including some in hectic traffic. He finished a dive shot and continued to show off his soft, fast hands inside near the crease. He used fakes and showed more skill as the camp went on. Watts also rode hard and pressured the defenders looking to clear, helped by his decent size.

Wisneski’s run at the 3d Blue Chip West camp was a good one, as the long pole showed himself to be an effective defender who can get his stick up into the passing lanes and use his long reach and span to make plays. He was particularly dangerous with the long pole in transition, showing the ability to use a face dodge to get inside. He scored three goals in one game that we saw. He’s got good speed up the field and really likes to use the handle to make plays.