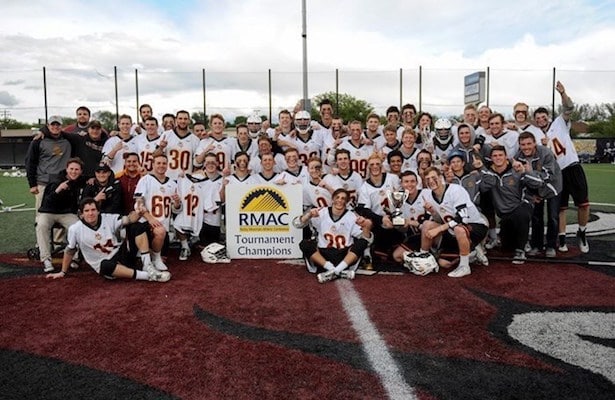 Steve Brandenburg (Los Alamitos) and Michael Marino (Aliso Niguel) played key roles as Colorado Mesa won the inaugural RMAC tournament with an 8-6 win over second-seeded Westminster on Saturday.  The game recap from is presented below

GRAND JUNCTION, Colo. – The 14th-ranked Colorado Mesa men’s lacrosse won the inaugural RMAC tournament with an 8-6 win over second-seeded Westminster on Saturday (May 7) at Walker Field.

The Mavericks started off strong scoring three goals in the first period including two from Steve Brandenburg.

Westminster wouldn’t score their first goal of the game until the 12:39 mark of the second quarter when Troy Vance scored a goal unassisted.

Colorado Mesa scored another three goals to end the first half with a 6-2. Two of those goals were man-up goals by Dylan Duresky.  Duresky was later named to the RMAC All-Tournament Team.

The Griffins would out score the Mavs in the third quarter 2-1 to cut into the Mavericks lead.

In the fourth, Westminster would cut the lead to one but a late goal by Steve Brandenburg would secured the Mavericks the win.

For the second straight game, Colorado Mesa was outshot. Westminster took a 36-32 advantage on shots but shots on goal were an even 17 a side.

Colorado Mesa dominated in face offs winning 10-of-18. Michael Marino won 50 percent of those at 6-for-12 in the contest.

The Mavericks were strong in their extra-man opportunities scoring on three of their four trips to the field.

Steve Brandenburg led the CMU in goals and points with four. He was named the tournament’s MVP.

Reece Callies finished the game with three assists and was also named to the All-Tournament Team.

Remi Reeves started for the second straight game in goal and was brilliant. Reeves made 11 saves and allowed just six goals while being named to the All-Tournament Team.

Alex Utt and Calen Ketcham were also named to the All-Tournament Team for the Mavericks.