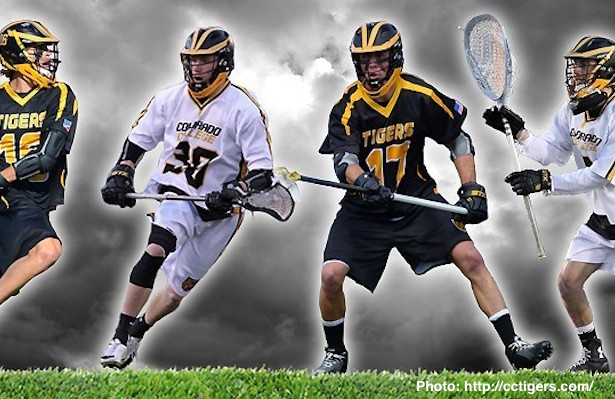 Four seniors who have played important roles in what arguably has been the most successful era of Colorado College men’s lacrosse were selected by their teammates to serve as captains during the 2016 season.

Defender Tim Jenkins, goaltender Chase Murphy and midfielders Eric Neumeyer and Ian Pelto will lead the Tigers as they look to build on the program’s recent success that includes a 35-15 record, three consecutive NCAA Tournament appearances and five straight victories over Whittier College in the battle for the Locker-Stabler Cup.

“All four of our captains have been an important part of the team’s success during each of their first three seasons,” head coach Sean Woods said. “They lead by example and they have strong personalities. They each have a different style, but they’re a cohesive unit and it’s the strongest leadership we’ve had since I’ve been here.”

Jenkins earned a spot in the starting lineup as a freshman and has been there ever since. Despite being asked to neutralize the opponent’s top attackman, the honorable-mention All-American led the team in caused turnovers and finished among the top three in ground balls during each of his first three campaigns.

Also an honorable-mention All-American, Murphy has compiled a 28-15 record along with a 7.44 goals-against average and .599 saves percentage. He started 16 of 18 games during his freshman season and has been a fixture in goal ever since.

Despite missing his sophomore season due to an injury, Nuemeyer has amassed 30 career goals and 45 points. Last year, he finished sixth on the team with 21 points and tied for sixth with 13 goals.

Pelto has been one CC’s most productive two-way players throughout his career. In the defensive zone, he has 94 career ground balls and 30 caused turnovers. He also owns 10 goals and 16 points.

In addition to the four captains, Colorado College has an abundance of leadership in six more seniors who will play an active role in guiding the team.

Defenders Corey Boeschenstein, Sumner Crosby, Jackson Givens and John Tocchio, midfielder Jacob Rockwell and attackman Robert Prior give the Tigers an ample supply of veterans who lead by example.

“Because lacrosse has such a large roster, you need more than four guys to be leaders,” Woods said. “Having 10 seniors who have been so successful is great for our younger players. They are spread out among the different positions, which is important when we split up in practice to do positional work.”

CC opens the 2016 season on Feb. 12 against Berry College in Mount Berry, Georgia.