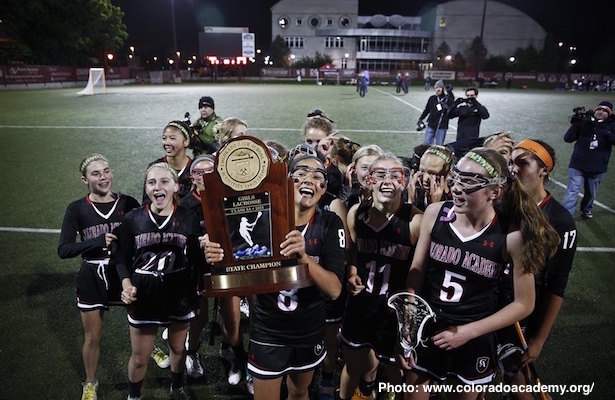 Colorado Academy girls’ lacrosse successfully defended their state championship by defeating Cherry Creek 9-8.  The championship capped a perfect 18-0 season and extended CA’s winning streak to 29 games over two season.  The two teams met in last season’s title game, and hadn’t met since then. Last year, Colorado Academy took the trophy with an 8-3 win in the lowest-scoring game in championship history.

Cherry Creek’s Eliza Radochonski scored the first goal of the game but CA wasted little time in responding. Claire Wright evened the score for the Mustangs, followed by a dump shot by leading scorer Lauren Russell, and another by senior Maddie Webster on a free position chance. Within 15 minutes, the Mustangs had taken the 3-1 lead.  Though Cherry Creek snuck one in on the other end, their defensive penalties cost them goals and set Cherry Creek up in opportune positions time after time.  Before the end of the half, Russell and Wright had each added another along with Prokupek. With a 6-2 lead, Colorado Academy looked to be running away with it before the midway mark, but Cherry Creek’s Radochonski and Pearl Schwartz scored two goals back-to-back to end the half only trailing by two.

Schwartz found the net again, her second of her eventual hat trick, at the start of the second half to put the pressure on Colorado Academy at 6-5. Russell seemed to reverse the momentum the Creek momentum with her third goal of the game, giving the Mustangs a 7-5 lead and some breathing room.  However, Cherry Creek game back with three more in a row to take an 8-7 lead.

But the answer came from Prokupek with a perfectly planned and timed cross-body shot from the left to even it up again with under five minutes to play. Wright completed her hat trick in those finals minutes, regaining the lead and forcing Cherry Creek to rush for the comeback. Creek had two chances in under a minute, but saves from All-American goalie Bridget Sutter secured the Mustangs championship, one that was completed by a 46-goal tally in a four-game playoff stretch.

Previous articleCalifornia Veteran Will Patton goes all in for 2016, recruits 11 teams to play August 6-7!
Next articleHolly Reilly Plays for UWLX Championship This Weekend
MaxLaxAll Lacrosse. All the Time.
Southern Section Boys