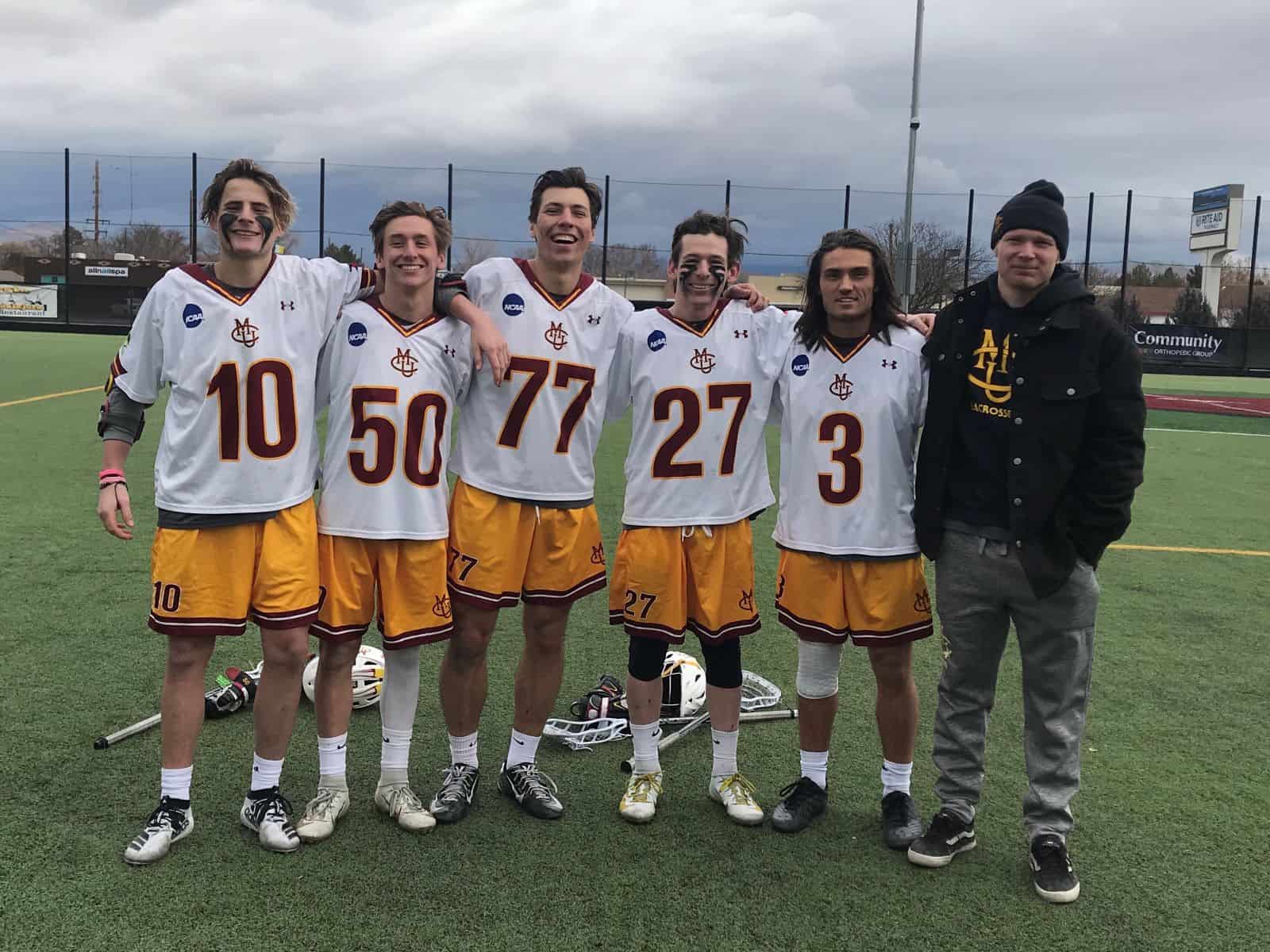 Colorado Mesa University Men’s Lacrosse is off to a 5-0 start this season, thanks in large part to contributions from Southern Californians. Most recently, the Mavericks swept Rocky Mountain Athletic Conference (RMAC) rivals Adams State 21-3 and CSU Pueblo 22-11. Previously, they won three in a row on a road trip to Florida and Georgia, beating Shorter, Saint Leo, and Embry Riddle. The team is currently ranked 17th in NCAA Division 2.

Of particular interest to MaxLax readers are the contributions the Mavericks receive from five former Trabuco Hills Mustangs and two players with Temecula roots.

The five former Mustangs (pictured above) once played on the field together in high school and are now reunited in Grand Junction, Colorado.

Senior Harrison Evans helped blaze the trailer to Grand Junction for his former high school teammates. He has played in two games this season and earned a start against CSU-Pueblo. He recovered a groundball in each of those games.

Sophomore Jason Kauo continues to impress after a strong freshman campaign in which he scored 15 goals and assisted on seven others. Kauo has appeared in four games this season with two starts. He scored his first goal of the 2020 season in the game against St. Leo, Florida.

Freshman Holden Evans, Colin Seedorf, and AJ Switzer are wasting no time in bringing the same energy to the college lacrosse fields that they did in high school.

Holden Evans, younger brother of Harrison Evans, had his best performance in the Maverick’s game against St. Leo, scoring 3 points (2g 1a).  Switzer is lighting up the field with his 18 points so far this season after scoring six goals and two assists in the games against CSU-Pueblo and Adams State. Seedorf is seeing lots of action as part of a freshman duo splitting faceoff duties winning. Seedorf has won 22 of 29 faceoffs and scored fast break goals in the Adams State and Pueblo games.

Senior Nick Wilson, shown above on the far right, is another former Mustang who headed to Grand Junction.  Despite splitting starting goalie duties last season, multiple injuries through high school and college forced a tough decision to leave the field this year but he still supports the team.

Junior defenseman Jacob Yordy (Great Oak ’17) has appeared in four games this season with one start. He has two points (1g, 1a), three groundballs, and 1 caused turnover to his credit.

Midfielder Johnny Cary (Temecula Valley ’16) returns for his senior year after earning First-Team All-RMAC in 2019. He has played in all five games this season with one start. He recorded nine goals and two assists so far.

The former Mustangs report that the Mavericks are like a family and that family atmosphere is especially rewarding for these five young men who grew up playing lacrosse together in Orange County. They now get to do something very rare and special, continuing a lacrosse relationship that began at the youth and high school levels on the college lacrosse field.