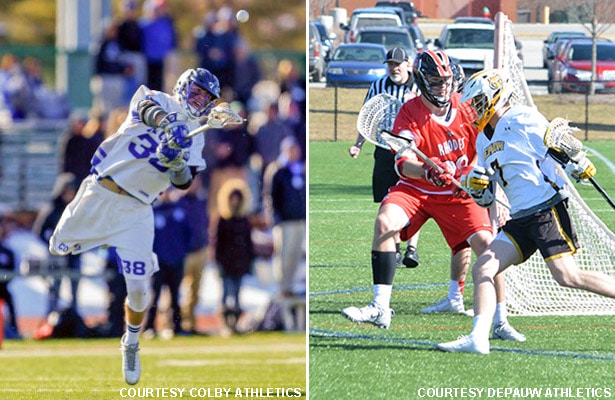 Freshman attack Colton Michel (Peninsula ’15) had three goals and an assist in his collegiate debut Saturday, but Colby College came up short in an 11-10 loss to Hamilton.

Michel helped the Mules to a 5-0 early lead with two goals and an assist in the first quarter, but Hamilton came roaring back and led 8-6 at halftime. In the third quarter, Michel scored on a man-up to tie the game 9-9.

Hamilton sophomore middie Jack Temko (Harvard Westlake ’14) did not appear in the game.

Freshman attack Matthew Dauw (Chaminade ’15) scored three goals and had two assists as DePauw improved to 2-1 with a 12-9 win over Cornell College.

Dauw scored unassisted in the first quarter to pull the Tigers within 3-2, then had an assist in the second period as they went up 6-4 at the break. He scored again early in the third period on a man-up to restore the two-goal margin at 7-5, then assisted on another goal eight minutes later to make it 9-7. His final goal opened the fourth-quarter scoring and gave the Tigers a three-goal cushion at 11-8.

Nick Heller (Beverly Hills ’13) scored two goals, including the game-tying tally with 2:47 left as St. John’s rallied to beat Siena 10-9. Heller also collected the ground ball that started the fast break that ended with the game-winning goal by Brian Gaffney with 1.9 seconds left for the team’s first win of the season.

Heller has three goals and an assist in five games this season for the Red Storm (1-4). He also has been credited with 18 ground balls.

With 1.9 seconds left to play Brian Gaffney lifted the Red Storm to a 10-9 victory over Siena! #SCtop10 #SJULAX pic.twitter.com/pbiRxRRBOa