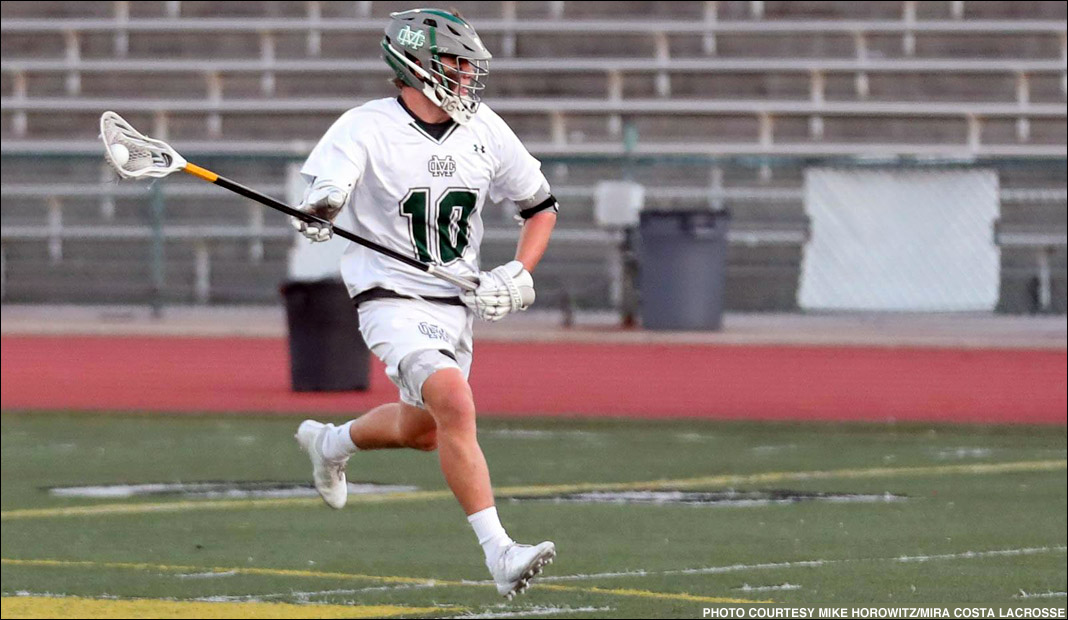 Junior defender Cole Garvey, a first-team all-LA selection as a sophomore last spring, announced his commitment to attend and play Division I lacrosse at Bryant University.

The Bay League Defensive Player of the Year in 2018 after collecting 92 ground balls and causing 31 turnovers, said Bryant’s style of play and reputation for recruiting players from Southern California helped the Bulldogs’ cause.

“I chose Bryant because of the university’s great academics and top-notch lacrosse program,” he said via email. “After watching practice and meeting the coaching staff, I knew that Bryant was for me. Coach [Mike] Pressler and Coach [Casey] Brodersen are both fantastic people and coaches. I believe I fit well into Bryant’s fast-paced, aggressive, hard-nosed style of play, and I like the prior success that West Coast guys have had out there.”

Junior Jake Fiske (Poway ’16) and sophomore Scott Phillips (Peninsula ’17) are among five SoCal players on the Bulldogs’ 2019 roster, along with two players from Northern California.

“Cole is the kind of kid coaches dream of having on their team,” Mira Costa head coach Aaron Karsh said. “He does all the little things right. He is driven and motivated, his energy is infectious, and he is a young man of outstanding character. He will be a difference maker at the next level, as he has proven to be for us at Costa.”

A team captain as a sophomore after earning second-team All-Bay League and a spot on the Under Armour Underclass West roster as a freshman, Cole Garvey said he hopes to make the most of his two remaining years in high school, both personally and for his team.

“For my last two years in high school, my goal is to simply become a better player,” he said. “I want to sharpen and improve as many skills as I can before I head to Bryant. I also want to continue being a good teammate and team leader at Costa.”

Garvey also had a long thank-you list of people who have helped him reach this point in his young lacrosse career.

“I want to give a huge thank you to my parents and my brother Caden for giving so much of their time and supporting me throughout my lacrosse years,” Cole Garvey said. “I would like to thank Coach Devo [Devin Arkison] and LockdownD for taking my defensive game to the next level, as well as helping me navigate through the recruiting process. I also want to thank coaches Scott Hochstadt, Zack Burke, Aaron Karsh, Jimmy Borell, Brian Kelly, Mark Jewell, all of whom been incredible mentors and coaches throughout my career.”

Arkison, a three-time All-American at Hobart and a longtime coach in Orange County, said he expects big things from Garvey in the future.

“Cole has an outstanding work ethic and plenty of talent,” Arkison said. “His attitude sets him apart from the pack. He will be excellent at the next level.”