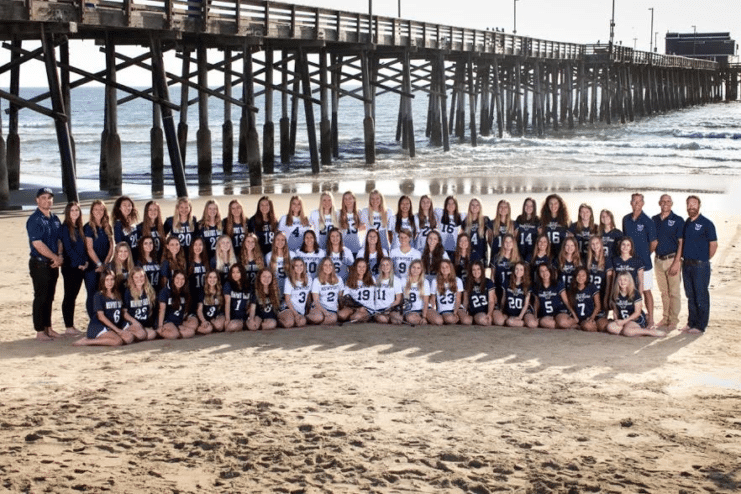 The continuously improving Newport Harbor girls’ lacrosse team has developed into one of the best girls lacrosse programs in Orange County.  From a 1-14 record in 2012, the Sailors reached the County semi-finals last season and continue to improve.

One person that deserves credit for the Sailors’ success and on how far the Sailors have come as a team is Coach Matt Armstrong.

Armstrong, who is in his sixth year coaching with the Sailors, has coached the Sailors to big wins this year against teams such as St. Margaret’s, Corona Del Mar and San Clemente.

“We ask a lot of them [the Sailors] year round, and they deliver,” Armstrong said.

But the Sailors didn’t become one of the best teams in Orange County overnight. In fact, there was once a time where Newport Harbor struggled to win games. You need to take it year by year to see how far the Sailors have come as a program under Armstrong’s guidance.

Armstrong started out for Newport Harbor in 2012, a year where the Sailors would like to forget. The Sailors finished 1-14 and went 0-10 in the then six-team CES (Century Empire Sunset) League.

“We didn’t have a real systematic program, we had a couple of teams and after those first couple years, we really started to develop a complete program,” Armstrong said.

The Sailors improved on their last place finish in the CES League.   They finished in a tie for fourth place with a 3-7 league record. Newport Harbor’s overall record of 4-11-1 left them out of the sixteen-team playoff field for the second straight year.

2014, a lot of improvement and a playoff berth:

Newport Harbor saw lots of improvement in 2014. The Sailors started the year off 10-1 before losing their final six games of the season to finish with a 10-7 overall record.  A 6-4 league record put the Sailors in second place in the CES League. Their performance was good enough for a playoff appearance. The Sailors lost 10-2 to Mater Dei in the first round.  Armstrong said that hard work and consistency were the reasons why the Sailors improved.

2016, a major breakthrough year and a year of making history:

With their home field under construction the entire season, the Sailors found themselves playing “home” games at Estancia High School. But that didn’t derail the Sailors’ hope for winning an outright league title. The Sailors won the CES League championship outright for the first time in team history, finishing 8-0 in the five-team league.

In nonleague games, the Sailors missed out on chances to pull off statement wins from teams such as Trabuco Hills, Beckman, Corona Del Mar and Los Alamitos, losing to each team by 1-2 goals.

When the Sailors got into the playoffs, they didn’t let the opportunity go to waste.The Sailors upset No.7 seed San Juan Hills on the road in the first round and No. 2 seed St. Margaret’s 13-12 in double overtime on the road in the quarterfinals. Newport Harbor lost to Foothill 5-1 in the semifinals to finish the season with a 13-7 record.  The 13 wins are the most the Sailors have had as a program in a year.

“I think that not having home field has made us stronger. It’s not easy, but neither is a season, neither are playoffs, and I think that some of the resilience we’ve shown has been a result of not having a home,” Armstrong said. “I’ve never heard them complain about coming here [to Estancia High School] which is awesome.”

Last season, Armstrong was able to get Kaleigh Gibbons on board as an assistant coach. Gibbons, who played lacrosse for 17 years, met Armstrong in a fundraiser at Newport Brewing Co. in Newport Beach where Gibbons worked and served the food.

“I certainly am appreciative of the amazing work she does,” Armstrong said of Gibbons.

How Armstrong got into lacrosse, Armstrong’s life:

Armstrong first got into lacrosse during his freshman year of college at the University of Michigan. Armstrong played from 1994-97, then coached JV for the inaugural boys’ lacrosse team at Arlington High School in Arlington, Mass. in 1998. A year after, Armstrong was an assistant boys varsity lacrosse coach for Lake Forest High School in Lake Forest Ill. Armstrong grew up in Chicago, Ill. playing baseball, soccer, volleyball and hockey. Armstrong currently teaches English at Newport Harbor High School.

Currently, the Sailors are 9-4 and have been ranked as high as third in Orange County. But Armstrong is a firm believer that the playoffs are what matter most.

“The season is about what you do in March, it’s what you do in April and May,” Armstrong said. “We’re looking to keep it going, keep growing and keep learning.”