Coach DeMaio Still Spreading Lacrosse and Values of No. 12 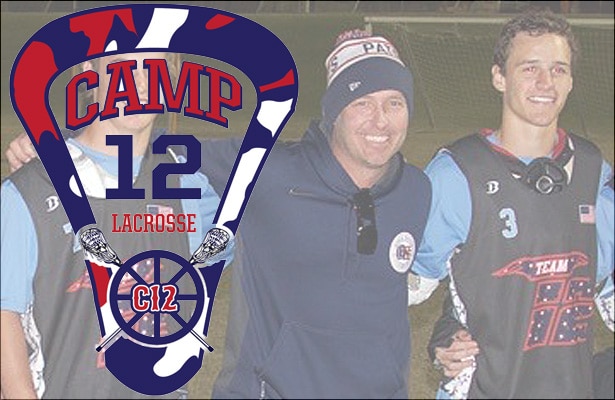 Tom DeMaio has spent 20 years coaching lacrosse and growing the game, from Boston to San Diego and places in between. The former director of operations for Brady’s Bunch Lacrosse, DeMaio currently is the head coach at Santa Fe Christian in Solana Beach.

He also runs Bunch Nation and Team 12, two club programs with different goals. Bunch Nation is a national team in which selected players travel from all over the country, meeting at tournaments to compete. Team 12 was launched to provide an alternative to highly competitive travel lacrosse, playing tournament much close to home to eliminate travel costs.

With rosters at all age groups — 11U, 13U and 15U, as well as high-school teams separated into graduation year — Team 12 provides opportunities to a lot of players.

And if all of that isn’t enough, DeMaio also holds Camp 12 Elite Lacrosse Camp each year in San Diego. Scheduled for July 26-29 at the University of San Diego, the four-day, three-night camp “will not only teach new advanced techniques and skills through high impact training, but be focused on developing the full lacrosse player on and off the field.”

As an additional benefit, the camp’s website says, “participants will be evaluated for consideration to participate in Bunch Nation and/or Team 12 teams.”

Coach DeMaio took some time recently to answer a few questions for MaxLax about his programs, his coaching philosophy and the meaning of the number 12:

Having coached high school players in New England and Southern California, what do you see as the single biggest difference between them?

“Every region of the country seems to have a style of play that reveals itself. I think certainly players in Southern California have that advantage of being outside all year round, and you see a very high level of stick skills, especially with the defensive players. The shooting and accuracy of the players in SoCal is also pretty impressive, as again the ability to be shooting and playing in the Winter months has its advantages.

“That said, many of the players I coached in New England — especially the Boston area — played a combination of ice hockey and/or football in addition to lacrosse. Many times in lacrosse, skills are honed in other sports and carried over. I see that much more with the Northeast players. A big part of my coaching philosophy is taking the tempo and competitiveness of an ice hockey practice (which many are only 50 minutes) and incorporating that into a successful lacrosse practice.”

As a coach, how do you help improve a player’s lacrosse IQ? What can players do on their own to improve their lax IQ?

“You hear the word lacrosse IQ a lot. Lacrosse IQ is developed by playing team sports over a long period of time. It’s not the kind of thing coaches can stand there and preach about. I believe small-area competitive games — 3v3, 3v2, 4v3 — when set up in various ways can prepare players for the situations that arise in real game settings.

“Offensively, lacrosse IQ really comes down to knowing when to move the ball and who to move it to. Players can improve lacrosse IQ by practicing critical skills on their own so the game slows down to them and, of course, watching college lacrosse live and on TV as much as possible. There is a lot to be learned from those guys who make it to the next level.”

What do you believe is the right balance of practice time (instruction) and game time (competition) for summer club play? Does it vary by age group?

“Yes it does vary. It is different for every player and where they are in their development process. Playing and traveling 9-10 weekends in any given summer is not for everybody. This is why I have enhanced my programing to have viable, affordable options from the local recreation player to the big-time D-I prospect or already committed player. I have used the formula of 16 hours of training and a minimum of three events (14-16 games) as my base summer program. After that, players have the opportunity to be invited to play regional or national events that fit their profile.

“I have always believed strongly in one full-week (overnight or not) teaching camp that fully immerses a player in the game and around others who are serious about the game for consecutive days. This is valuable for every player who wants to succeed in the game of lacrosse.”

It seems Team 12 has become a larger focus of your organization in recent events and for this upcoming summer. Can you briefly explain the Team 12 concept and what type of player fits best?

“Training — more of it, rather than the tournament-only teams that everyone has become familiar with in recent years. With teams set up in three separate regions (Orange County, Riverside and San Diego), T12 has the ability to provide high-level, positive coaching, without forcing families to travel a long way for good instruction. We also have a T12 “Select” option for the players, which combines the best players from the three regions and competes in a few events per year. As far as big time national events, T12/Bunch Nation National attend very good college recruiting events. Those are invite-only and for our top players who desire to play at the next level.

“I encourage an open line of communication between all of our players/families and myself to find the best opportunity for a particular player. If a player is dedicated and putting in the work with training and on their own, then they will pave the way for themselves to the highest level.”

The number 12 shows up a lot in your organization. What is the significance of the 12?

“My first Team 12 was a 6th-8th grade team in Orange County in 2013. The original idea was to take 12 players, give small-group training to those core players, then add on other top players from other regions to make a “super team.” On that team, every player wore the No. 12. Most of those kids have become impact players in high school, and many are now committed to play lacrosse in College.

“The ideal No. 12 player plays the game selflessly at a high level and makes everybody better on and off the field.”