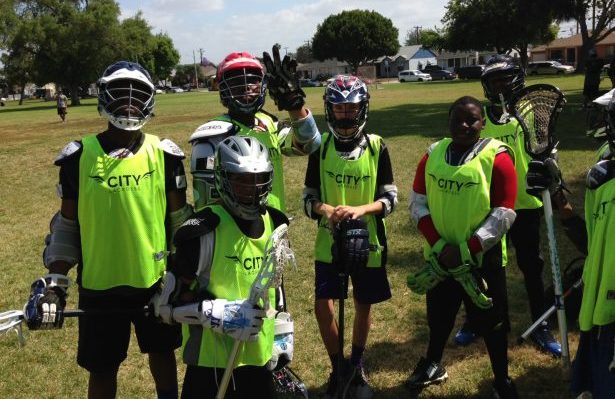 City Lacrosse of Los Angeles was founded in August of 2014 with the goal of creating meaningful lacrosse experiences for the children of South LA by David O’Connor and Mike Levin.  Having moved from Boston, where he served as President and CEO of the non-profit organization, MetroLacrosse; Mike brought with him a wealth of experience in lacrosse, education, urban youth-development and non-profit management. Driven by his passion for the game and for philanthropic endeavors, David teamed up with Mike to launch a brand new sports-based youth development organization.

In the fall of 2014, City Lacrosse developed its first school partnership with the Inner City Education Foundation (ICEF) network of charter schools.  After much consideration, the organization launched a pilot program for 6th grade students in each of the 5 ICEF middle schools.  To enroll students in this pilot, after-school program, City Lacrosse conducted lacrosse units in the PE departments of each school, eventually resulting in the first ever City Lacrosse Spring Season.

This spring  City Lacrosse has hosted a series of  Saturday scrimmages with the goal of introducing players to tournaments.  As the upcoming summer season approaches, the hard work of the players is paying off and the players are improving rapidly. The U15 and under teams are comprised of players who have fairly recently taken up the sport. Coach Mike Levin, former Brown Goalie feels they are on the right track. ” Enthusiasm was very high today in the scrimmages. We finished strong and the sticks are getting hot.”

In the scrimmages big Cameron Adam-Cesar continues to impress. He dodges well and can really shoot the ball. Timothy Bush has played middie and defense, and takes advantage of his speed at both spots. Izeal Richadrson continues to show his shooting ability, putting most of his opportunities in the goal. Brandon Straker has shown both dodging and shooting ability on the run with strong righty rips.  On the girls side Serena Dillon shows continued improvement being equally adept at feeding and shooting.  Dianna Washington had a big day Saturday scoring several goals and assists and well as winning her brave heart in short order to give her team a boost.

Devin Arkison was a 3 time all American at Hobart College as well as being a member of the NJ Lacrosse Hall of Fame. He coaches elite high school and works privately to develop defensive players. He can be reached at d_arkison@hotmail.com. His most recent commits are to Notre Dame, Denver and St Joes.