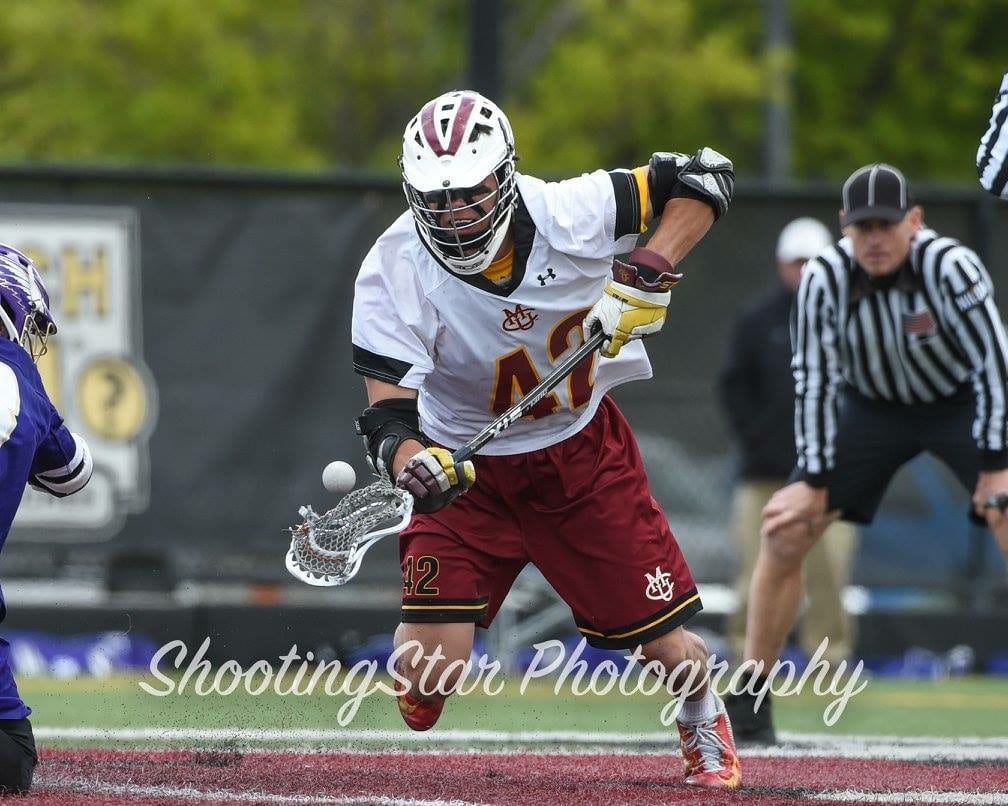 This week we check in with former Aliso Niguel Wolverine and current Colorado Mesa Maverick Michael Marino.   Marino, a rising senior, completed 2018 with a team-leading 66.9 win percentage at the dot, ranking him 10th in the NCAA Division II Faceoff Win Percentage, 127 groundballs as well as nine points (7g, 2a). He also went 30 for 30 in a game, which was one short of the NCAA Division II record.

Marino did not follow the typical recruiting path to CMU.  Marino’s high school varsity career was just getting underway when many of his contemporaries were making college commitments.  The former baseball player did not play lacrosse until his freshman year of high school, and almost immediately gravitated to Faceoff Specialist.

“The coaches announced at practice the first week that the team had lost it’s faceoff guy to graduation and needed a new one,” Marino explained.  “I asked if the faceoff guy plays a lot. And when they said yes, I said I’ll do it.”

With the help of the Aliso Niguel coaching staff and private coaches like the Faceoff Factory team of Joe Nardella, Blake Burkhart, and Heeyoung Leem and Brendan Fowler of the Faceoff Academy, Marino spent the next four years getting better.  He played JV as a freshman, made varsity as a sophomore, was Sea View League Player of the Year and committed to Colorado Mesa, after his junior season, and was Third Team All-Orange County as a senior. His career ground balls and Face Off win percentage are still Aliso Niguel program records.

In the summer of 2014, Colorado Mesa coach Vince Smith invited Marino to a prospect camp in Grand Junction after seeing his videos, and by October Marino accepted an offer.

“I was really impressed by the coaching staff and the school offers the smaller classroom experience I was looking for, so when the offer came in I accepted it”, Marino said.  “I also fell in love with the town of Grand Junction.  After spending my whole life in Orange County, I was looking for a cultural change and the small town atmosphere provided that.”
Marino says that he has really enjoyed his time on campus and that the experience has helped to broaden his horizons.  The school’s proximity to the mountains allows him to hit the slopes on a regular basis and his roommate has helped him find a new passion, golf.

Marino has also thrived academically.  He says that while he was not the most motivated student at Aliso Niguel, having a scholarship at risk, encouragement from the coaching staff, and the school’s classroom environment have pushed him to achieve better grades than he ever earned in high school.  He is also applying to graduate school where he’d like to earn a Masters degree.

On the field, Marino’s  mental and physical maturation have have been the keys to success He arrived on campus in the fall of 2015 as a scrappy but skinny recruit looking to earn a starting role on the lacrosse team. Despite earning regular playing time as a freshman, neither he nor his coaches were satisfied with his 52% win percentage.

“Freshman year was a wakeup call,” said Marino.  “The players are so much stronger at this level. The coaches told me at my year-end interview I need to put on weight in the off-season.”

So Marino hit the gym in the off-season, and with the help of fitness coach, Adam Wright, he put on 25 pounds.  He also kept a stick in his hand and stayed sharp teaching his craft to younger players with coaching jobs.  The results were apparent.  Marino raised his wins to 64% as a sophomore, was MVP of the 2017 RMAC tournament and won 78% of his faceoffs with a goal in the championship game.

He also credits Fowler, Nardella, Young and Burkhardt with helping him continue to improve.

“They were a big part of my success,” Marino said. “Brendan helped me to better understand the deeper stuff, and that’s a big part of facing off. I was disappointed in my freshman season.  Brendan reminded me that it is very rare for a freshman to go in and kill it and that I should learn from that experience to get better. So I took that advice and I came back as a sophomore wanting to shock people and that’s what I did.”

Marino’s advice to young Faceoff Specialists on their way up is to hit the wall at every day or at least every other day.  He also says to text message guys who have been there and take draws with them.  And finally, hit the weight room.  It says a lot to a coach when you put in the work in the weight room.

Time is winding down on Marino’s college career.  He has one academic year left to see if he can raise his faceoff percentage for the fourth consecutive season, return to the NCAA tournament, and enjoy all that Grand Junction has to offer.  Then it’s probably time to return back to So Cal and begin his graduate studies.

As he reflected back on his time at Aliso Niguel and CMU, Marino wanted to thank a few people for helping him on his journey.