Checking in with Kevin Kodzis 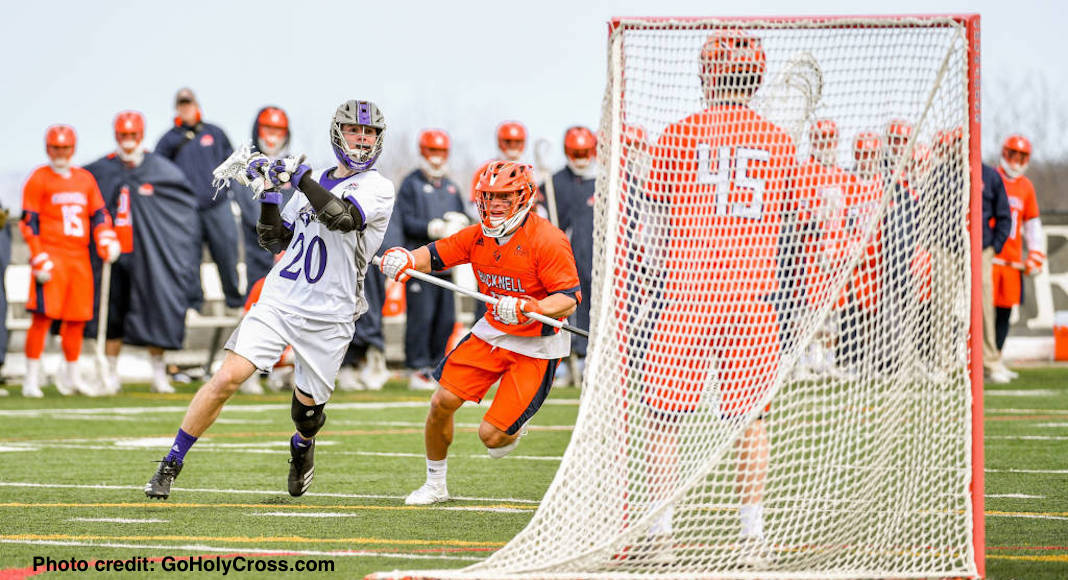 This week we check in with former Foothill Knight and current Holy Cross Crusader Kevin Kodzis.  Kodzis just completed his sophomore year at Holy Cross and ended the season as the team’s top scorer with 29 points (22 goals, 6 assists).  He played in all 13 games, started in seven, and was named the C&R Tire Crusader of the Week in April as well as the team’s Offensive Player of the Year at season end.

Kodzis’ high school career had barely begun when he verbally committed to the Crusaders in February 2014 right before the beginning of his high school sophomore season.  Even at that young age he was impressed by the academic and athletic opportunities the Patriot League school would afford him.

“I chose Holy Cross for the academics and athletics,” Kodzis said by email. “The school provides a great resource for networking since it has a tightly-knit alumni program who are very involved with our program. As a program we also have networking days, where we go to both Boston and NYC and visit and talk to alumni to spark interest and learn about several different areas of businesses in order to insight goals and opportunities for ourselves.

This stood out to me because it is awesome to play athletics in college but it is extremely important in what your education provides to you after college. Ultimately that aligned with my own goals for a career.”

With his college decision behind him at an early age,  Kodzis continued to work on his game and his academics.  Showing improvement in each high school season, he racked up 186 points (123 goals, 63 assists), 103 groundballs, three All-County recognitions and All-American honors by the time he graduated in 2016.

He was also a captain his senior season and spent his summers traveling east with West Coast Starz to test his mettle against the best high school players in the country. Kodzis credits these experiences with giving him realistic expectations when he stepped foot on campus.

“My expectations coming out of high school was fairly accurate,” Kodzis said.  ‘With traveling and playing on the east coast I often would judge players as to where there were committed to use it as motivation to beat that kid that I would eventually play in college.”

Even with realistic expectations, there are still adjustments to be made.  Less than 3% of high school lacrosse players compete at the D1 level and that narrowing of the field to only the most athletic, most skilled, and most intense players raises the speed of the game to a new level and increases the importance of team play.

“Everything is faster and it’s not just a one on one battle to score goals,” Kodzis said. “The best success comes with working with your teammates because the slide will be there much quicker than you know, so you have to be already aware of it and know where the right look is and the smart one too.”

All the hard work came together in March of 2017 when Kodzis scored his first college goal against No. 12.  He finished the season with four points (3g, 1a), confidence in his ability to play at this level, and  the knowledge that  there was still work to be done in the gym and on the field if he wanted to reach his personal goals.

“Over the summer (of 2017) it was lifting and keeping the stick in my hand as much as possible,” Kodzis said. That consisted of either shooting, hitting the wall, or even coaching where I got to teach others techniques which in turn helped me sharpened my own skills.

The weight room also makes a significant difference because with strength comes confidence. In Division 1 the kids are all bigger, faster and stronger, so the stronger you become helps with not being pushed around.”

Kodzis credits his offseason work and a new mindset for moving him into a starting role and and the seven-fold increase in offensive production in his second season.

“The mindset I brought into the fall was completely different for this past year,” he said. “Everyday it came down to using each day as a tool to get better, and give me best effort everyday at practice. Whether it was weight room or actual practice, I knew if I went as hard as I could that day that it would pay off later.”

Like all student-athletes, Kodzis’ athletic achievements are only part of the story.  Kodzis freely admits that balancing the athletic and academic demands is a challenge and described the Crusaders support system.

“The student athlete life is no joke,”  Kodzis said. “I will not beat around the bush and say it is easy to do. It is your life and if it is your choice you need to embrace it and run with it. The balance of academics after a 6 hour day of lacrosse is very difficult, though with time it becomes much easier to manage. I’d also say that after each day you feel accomplished, and that is addicting on its own.

For our team we have a mentorship program within the team that keeps each player accountable for their academics, athletics, and support for when you need it. We also divide all the teammates up into four tribes, in which we compete. This is how we decide who eats first and other perks when we are on the road. The point system is developed through our academics (gpa), weight room, and community service activities. So not only do you have your mentor and mentee to keep you accountable for your academics you also have your whole tribe that relies on your to perform both in the classroom and out.”

Time passes quickly and while college probably seemed a long way away to Kodzis when he verbally committed in 2014, but he now only has two seasons left.  He continues to put in the time in the gym, on the field, and in the classroom, and is also adding the team leadership role that comes with being an upper class-man to his plate.

“My personal goals this year are to learn how not only improve my game but make my teammates around me better,” Kodzis said . “This off season I am working a very similar concept from last year.  That includes weight lifting, conditioning, stickwork, and coaching. I also have been reviewing my film from this past year to work on some of the areas I need to improve.

Something different though is trying to keep my teammates accountable for their work during the summer. As an upper class man now it is crucial to keep everyone on the same page and working towards the same goals, in order to be successful this year. We know what we need to work on, now it’s just about each kid executing during the off-season.”

Kodzis also has some advice for the next generation of Orange County players getting ready to begin their college careers.

“My advice for incoming freshman for fall ball, is to work as hard as you can to be in the best shape during the summer. And when you get to school to not be intimidated by the difference in the game but use it as a tool to motivate you to becoming a better player.

Using your academics and athletics as a tool to further your position in the work world is what should inspire high school and youth lacrosse players. The game of lacrosse is beautiful but I can not stress it enough, it is such a tight community where it provides a network in almost all aspects of life.”