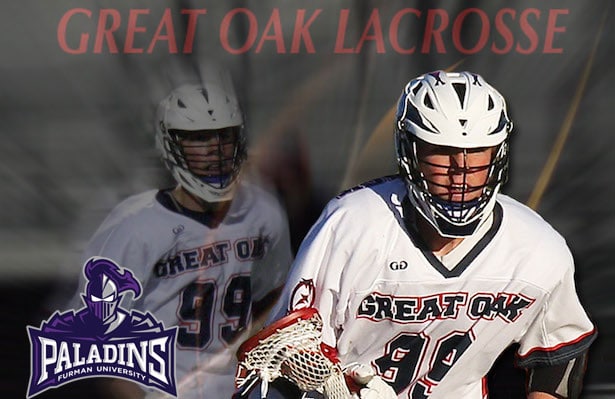 Great Oak sophomore Chase Taylor has verbally committed to play Division 1 lacrosse at Furman University in Greenville, South Carolina. The 6-4″ midfielder was the second leading scorer for the Wolfpack as a freshman despite missing five games with an injury.

Taylor will play for former Team USA coach Richie Meade in the Southern Conference. The Paladins began playing Division 1 lacrosse in 2014, and will enter their third season of play this spring. Taylor will see plenty of familiar faces when his college career begins. SoCon opponents like Jacksonville, Richmond, Bellarmine, High Point, and Air Force are increasingly attracting Southern California talent to the southeast.

Great Oak coach Karl Rohlin says of his talented sophomore: “Chase is the complete player. Chase was the second highest scorer on our team last year as a freshman. He missed five games with a broken thumb. He played against San Clemente with a full arm cast on his right arm, and scored five goals in that game. An opposing coach asked me “where did I find another Dakota Rohlin”. That pretty much says it all. Chase has the ability to be that good, or better by the time he graduates. I just want to watch him play for another year and become the player that he is destined to be.”

As the twitter traffic shows, Taylor’s club coaches are equally impressed by his talent and work ethic