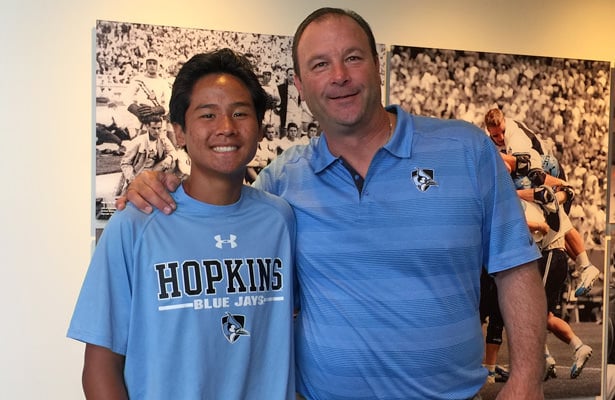 Midfielder Chase LaDrido, who will be a freshman at the Bishop’s School in La Jolla this fall, wrapped up a whirlwind month of June by accepting an offer and committing to Johns Hopkins earlier this week.

LaDrido is believed to be the first commitment by a member of the Class of 2020 from the West Coast, as well as the first 2020 commitment for Hopkins. According to Recruiting Rundown, there have been nine 2020 commitments thus far.

LaDrido’s summer tour started at Adrenaline Black Card at Stony Brook on June 10 and included stops at NXT MVP Rising at Towson University, where he was named Best Midfielder and an All-Star; Jake Reed Nike Blue Chip at UMBC; and the Under Armour All-America Uncommitted Showcase, among others.

“Chase is a very athletic two way middie who can play between the lines and can create offense off the dodge,” said Jono Zissi, West Coast Starz Director. “He is ambidextrous, and his IQ continues to grow.”

LaDrido has played for RC Starz and West Coast Starz, as well as for 3d San Diego, 3d Pacific and 3d National, the LA Heat and Mad Dog Select National. In January, he played in the 3d Blue Chip West Regional Camp in Arizona.