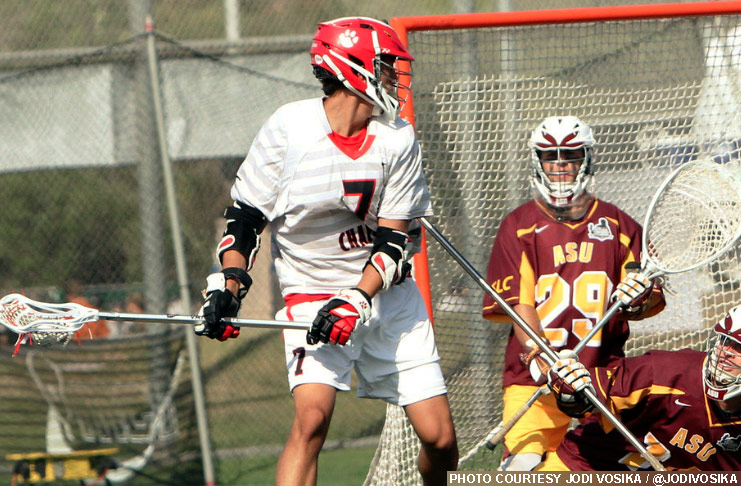 A week after knocking out the No. 2 team in the country, the Chapman Panthers are looking to keep the momentum rolling on a tough trip to Colorado to take on the CU Buffaloes and the Colorado State Rams. It’s not an easy task, though, as both teams currently sit in the MCLA’s top eight and historically have dominated in home matchups.

We’re going to learn a lot about the Panthers this weekend. With a sweep, the defending national champions could find themselves right back in the conversation for the Top 5. A split would keep Chapman right about where it’s at, and being swept would send the team reeling again.

Keep an eye on Panthers face-off man Simon Jenkin (Bellevue, Wash.), who has won 67percent of his draws this season. He could prove instrumental in allowing Chapman to play these games at its own pace, which is especially helpful now that the offense is finally in a groove.

Sunday’s game will be a homecoming trip for junior LSM Kipp Blanchard, a Boulder native who already has established a career-high this season with 25 ground balls. In a game that could very well come down to who can win the 50/50 draws, expect Blanchard to be a key element to Chapman’s success.

If the LaxCats can come away with a win, it would completely alter the trajectory of their season. No team has caught the MCLA by surprise quite as much as No. 2 Cal, the 8-0 team with three top-15 wins on its schedule already, all by convincing margins.

After an embarrassing 13-4 home loss to Virginia Tech, it looked like it might be over for Arizona. Then, the LaxCats pulled off a nice statement win in an SLC South matchup at San Diego State. Is it possible that win could send ‘Zona into the at-large race? Much easier said than done, and it all starts against Cal.

The LaxCats might be struggling, but you can’t pin that on the defense. Starting goalie Pierce Philp (Los Altos, Calif.) is allowing only 7.33 goals per contest in a breakout campaign after two years away form the program. He can’t do it alone, though, especially not against a Cal team that hasn’t been held under double digits yet this season.

The Bears’ offense starts with possession, which starts with freshman face-off middies Jake Pistotnik (Sierra Canyon) and Mark Galanti (Chaminade). The duo from SoCal has combined to win 70 percent of their draws (119 of 169). Pistotnik has won 91 of 124 (73 percent), and Galanti has won 28 of 45 (62 percent).

Aside from these matchups, the Division I side is relatively quiet this week. Grand Canyon, UC Santa Barbara and Arizona State are all sitting the weekend out.

It’s easy to get hyped for the Eagles’ success during their road trip through the UMLC earlier this month, but the team still needs to take care of business within conference play to keep itself in the No. 2 spot in the country.

These should be easy wins for CUI, but no opponent can be overlooked. For UCSD, it’s freshman attackman Joseph Sawires (San Ramon Valley, Danville, Calif.) and sophomore middie Anthony DiGiorgio (Preuss School, La Jolla). Sawires leads the Tritons with 21 points on the season, and DiGiorgio is right behind him with 19. Cal State Long Beach is a bit more balanced, but it’s Cameron Yerzyk (Chaminade, West Hills) that the Eagles need to figure out how to defend. The sophomore attackman is capitalizing in 2017, leading the team with 33 points.